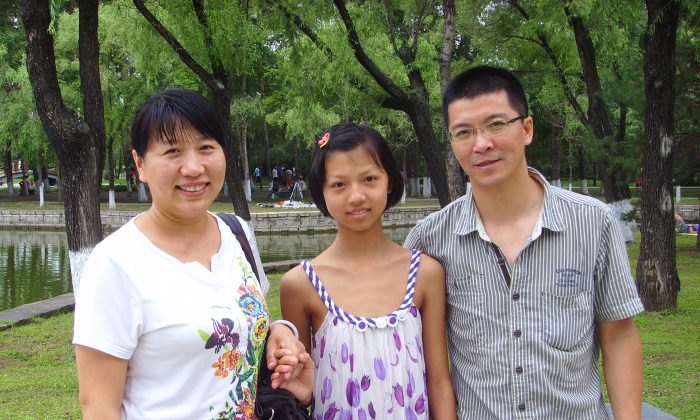 Han Wei (R), his wife Lu Shiyu (L), and their daughter at a park in Dalian, the capital of Heilongjiang Province on July 28, 2012. Han was recently kidnapped by police at his office. (Courtesy of Lu Shiyu)
China

Chinese Refugee, Prevented From Traveling to US, Now Abducted

Han Wei, a son-in-law, husband, and father—and the practitioner of a persecuted spiritual discipline in China—was set to join family in the United States as a refugee. But he was stopped from leaving the country late last year and was recently disappeared by Chinese security forces.

Security agents in Harbin, the capital city of the northeastern province of Heilongjiang, broke into Han’s business offices in the afternoon of May 5. They arrested Han, 44, confiscated his car, and sent him to a detention center in Harbin, the capital city of Heilongjiang. His colleague, also a practitioner of the traditional meditation discipline Falun Gong, which is persecuted in China, was also taken away. The men who came were from the feared 610 Office, a secret Party task force set up to eliminate Falun Gong.

The brazen arrest of Han Wei in the middle of a work day simply for his belief is a reminder that the Chinese communist regime is still actively persecuting the Falun Gong spiritual group, even though the ferocity of the campaign has slowed somewhat in recent years.

Falun Gong, a traditional Chinese meditation practice that espouses moral teachings of truthfulness, compassion, and tolerance, became the target of a Cultural Revolution-style suppression on July 20, 1999. Then Communist Party leader Jiang Zemin ordered the persecution because he felt threatened by Falun Gong’s immense popularity among both regular Chinese citizens and Party elite.

On June 10, Jiang created an extralegal organization, the 610 Office, and gave it the mandate of overseeing the suppression of Falun Gong. Nearly 4,000 practitioners are confirmed to have died in custody, mostly through torture, and the hundreds of thousands others that are incarcerated are frequently tortured and abused, according to Minghui.org, a clearinghouse for first-hand information about the persecution. These numbers are bare minimums given how difficult it is to gather accurate information about the campaign.

The notoriety of how Falun Gong practitioners are treated in detention, and state of the Chinese prison system, has Lu Shiyu, the wife of Han Wei, feeling intensely apprehensive.

“It’s incredibly easy to dispose of a person in prison,” Lu, a radio host with the New York branch of the international Chinese-language broadcaster Sound of Hope, told Epoch Times in a telephone interview. “Chinese prisons just that lawless.”

Lu, 47, recalled that Han Wei had already been arrested three times for his faith—while attempting to file a petition in 1999, picking up Falun Gong material at a train station in 2001, and meeting 19 other practitioners in 2006—and was badly tortured while being interrogated by police at the Heilongjiang public security bureau in 2001.

After Han was handcuffed and suspended by his wrists for two days straight, “his wrists began to bleed as the skin in contact with the handcuff peeled off. Then, to increase his pain, the police officers removed the handcuffs, and bound his open wounds with ropes,” Lu said. “They also tried to suffocate him by placing a plastic bag over his head.”

Han’s wrists still bear the scars from the interrogation.

Han Wei’s arrest has directly affected his wife’s elderly and sickly parents, whom he is helping to care for.

“He is like a real son to my parents, and my mom treats him like one of her own,” said Lu. “After learning what happened to her son-in-law, my mother’s blood pressure shot up.”

The Lu family on the whole has suffered since the start of the persecution—given that more than 10 members of the extended family practice Falun Gong, the typically joyous mood during lunar new year reunions has been absent because “there’s always one or two missing.” Lu Shiyi said.

Over the years, six members of the Lu family have journeyed to the United States to escape the persecution. In 2013, Han’s wife moved to New York with their teenage daughter and managed to secure asylum status and travel documents in the United States for Han in 2015.

But when Han Wei tried to leave China in November 2015, he was told by airport staff that his passport had been revoked by state security because he was a practitioner of Falun Gong.

Persecution of Falun Gong in Harbin

The northeastern provinces of Heilongjiang and Jilin have annually ranked near the very top of the list of the provinces where Falun Gong is persecuted the worst in China, according to figures compiled by Minghui.

While most Falun Gong practitioners across China were able to safely file criminal complaints against Jiang Zemin following a legal reform in May 2015, Heilongjiang police retaliated against local practitioners who tried to do the same. Over a two-day period in July, Harbin police arrested and detained at least 44 practitioners, and in October, Daqing police took away about 20 practitioners, including the mother-in-law of a YouTube celebrity.

Human rights lawyers representing practitioners held captive in a brainwashing facility in the rural area of Jiansanjiang for the past two years have themselves been brutalized by local authorities and subject to Kafkaesque treatment as they negotiate the Party bureaucracy in Heilongjiang in search of legal justice.

Party leader Xi Jinping might have hinted that the regime is open to shifting its stance on the Falun Gong issue through several public gestures this April, but the persecution at the grassroots level appears to be very much ongoing.

“As long as the Chinese Communist Party continues to exist, Chinese citizens have no freedom of belief,” he added.

As of late May, Han Wei was being held in a detention facility in the district of Harbin in Nangang.

Fears of a Friend and Wife

Ding Lianhao, formerly the proprietor of an interior design business in Harbin, and a long-time family friend of Han Wei, told Epoch Times that he was stunned to learn about Han’s arrest.

In a telephone interview, Ding, who now lives in Flushing, New York, said that Han was always willing to hire as many Falun Gong practitioners as he could at his company—a fruit retailer—since many employers in China either don’t hire, or have fired practitioners, whether out of their own volition or due to pressures from the Chinese regime.

Ding added that he is “a bit terrified” by the possibility that his friend could potentially be a victim of organ harvesting. In 2006, researchers concluded that the Chinese regime was almost certainly running a massive organ transplantation industry using organs harvested from the bodies of live Falun Gong practitioners. Researchers have estimated that hundreds of thousands of practitioners have been killed for their organs since 2000.

“I’m extremely worried,” said Lu Shiyi. “I learned about my husband’s plight shortly after reporting the case of a Falun Gong practitioner from the same province who was beaten to death within days of being detained.

“I hope that Westerners can pay more attention to the persecution of Falun Gong in China, and I’d be very grateful to those who can help my husband escape.”