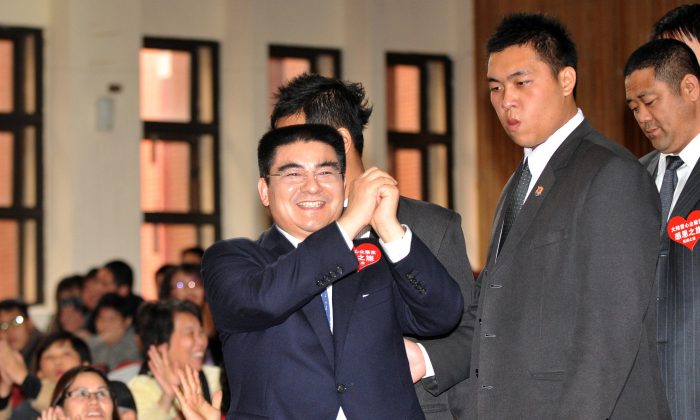 Known for his environmentalist stance and such publicity stunts as selling “canned air” in smoggy Beijing, Chinese millionaire Chen Guangbiao has turned his attention to The New York Times. With his estimated $740 million in wealth, he intends to purchase a sizable share of the prestigious American newspaper, which he estimates to be worth about $1 billion. (Its current market capitalization is $2.4 billion.)

Chen has a meeting set for Jan. 5 with a “leading shareholder” of the company in New York, according to a report by Reuters. Representatives of the newspaper said they had not heard of any meeting arrangements between Chen and management.

“Soon, I will go to America to do three things,” Chen told a crowd at a Dec. 30 award reception in the southern Chinese city Shenzhen, according to China News Service, a state-run media.

The first, he said, “is to go discuss the acquisition of The New York Times.”

Despite a recent statement from the paper’s chairman, Arthur Sulzberger Jr., saying the Times wasn’t for sale, Chen seems confident of his position. “There’s nothing that can’t be bought for the right price,” Chen said in the report. “If we act in sincerity and good faith, I believe the Times chairman will change his way of thinking.”

Chen built his fortune through his recycling company, Huangpu Renewable Resources Utilization Group. At the same time, he has boosted his reputation in China with publicity stunts. After anti-Japanese protests erupted in cities across China last year, for example, he spent nearly $800,000 on dozens of Chinese-made cars to give to people whose Japanese-brand cars were damaged by mobs.

Despite having once spent $30,000 on an advertisement in The New York Times in August 2012 asserting Beijing’s territorial claim over the disputed Senkaku Islands, Chen said his motives in acquiring The New York Times are instead apolitical and centered on a wish to bring attention to philanthropic and environmental causes, according to a report by International Business Times.

“I realized that the Times’ influence all over the world is incredibly vast,” Chen said. “Every government and embassy, all around the world, pays attention to the New York Times.”

Chen hopes to bring the Times to China, where it was blocked by regime censors after it published an article about the alleged hidden wealth of the relatives of former Chinese prime minister Wen Jiabao.

“My plan for The New York Times if I get the deal will be putting the paper on every newsstand across the country and making The Times accessible to every Chinese household. China is such a big market and is too big to miss,” he said.

One of the 400 wealthiest Chinese, Chen has often stressed his commitment to charitable activity and the environment. His sale of “canned air” in Beijing was one such move ostensibly intended to raise awareness about ecological issues.

In one of his characteristic remarks, Chen said, “It is better to live as a respected philanthropist than die a lonely slave to money.”