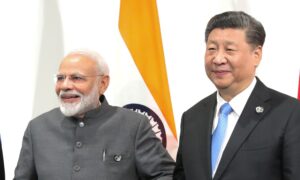 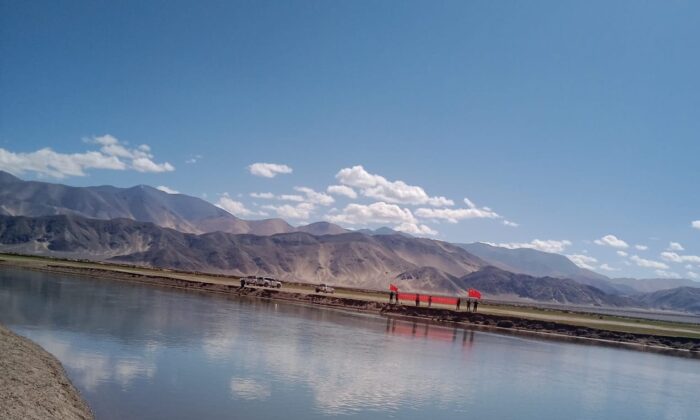 Chinese raise a red banner at the Indians celebrating Dalai Lama's birthday in the village of Koyul in the Nyoma sector of Ladakh on the de facto border between the two countries on July 6, 2021. (Picture courtesy Urgain Tsewang)
India

NEW DELHI—A group of Chinese nationals hoisted a red banner and five-starred red flags in view of Indian villagers who were celebrating the birthday week of the spiritual leader of Tibet on the opposite side of the Indus River, along the de facto China–India border.

The intimidation of Indian villagers has occurred multiple times recently, Urgain Tsewang, the head of the village of Koyul, in the Nyoma sector of Ladakh, told The Epoch Times. Koyul is a village of around 540 people, most of whom are nomads and laborers.

“Last year, we couldn’t celebrate due to COVID restrictions. This year, we got permission for a gathering of only 30 people. With the presence of Indian army personnel and tourists and so on, we had a total of 50 people,” Tsewang said.

During the celebration, a contingent of Chinese civilians and army personnel arrived in five vehicles and displayed the red banners and flags about 200 meters from the community center where the gathering was held on July 6.

Chinese raise a red banner and red flags in view of Indians celebrating the Dalai Lama’s birthday on the opposite side of the Indus River in the village of Koyul on the de facto border on July 6, 2021.

Many communities in the high Himalayas follow Vajrayana Buddhism, an esoteric tradition of Buddhism. Since it was preserved in Tibet, it became synonymous with Tibetan Buddhism; however, the followers today are spread across the larger Himalayan terrain. Some Buddhist communities revere the Dalai Lama, who is the leader of Tibetan Buddhism.

Tsewang said that the Chinese asked the gathering to “not celebrate the birthday and go back.” He claimed that the Chinese were on Indian territory, which extends about a mile from the other bank of the river.

While Indian defense authorities confirmed to The Epoch Times that the Chinese came to the other side of the river and hoisted a red banner and red flags, they said there was no intrusion.

“It was on their side of the LAC (Line of Actual Control, or the de facto border), and it wasn’t an intrusion. Such incidents have happened before as well,” a spokesperson for the Indian defense authorities said.

The river freezes in peak winter months when temperatures in the region plummet below zero, and in December and January, the nomads choose to walk across the river, since the nearest bridge is more than 12 miles (20 kilometers) away, Tsewang said.

While the nomads have always had access to pastures on the other side of the river, in an area they call Dokbuk Kagjung Koyul, they have recently faced severe intimidation by the Chinese, who, according to locals, previously had stayed on the other side of a mountain there.

Villagers in Koyul village in the Nyoma sector of Ladakh in India on the de facto border with China start a procession to celebrate the birthday of Dalai Lama on July 6, 2021.

India and China both have different perceptions of the border in the trans-Himalayan region. Before a recent massive military buildup and before both sides started building infrastructure, it was largely uninhabitable land.

Tsewang said the Chinese have claimed territory from India and often seek to intimidate people on the Indian side. The Epoch Times couldn’t independently verify such claims by locals who have centuries-old affiliations to the land.

“A similar incident happened on June 20 when we were fixing a summer solar pump on this side of the river. They came on that side and started shouting at us. They were asking us not to put the pump, arguing that it’s too close,” he said.

Such cases have been reported to the Ladakh Autonomous Hill Development Council that looks into grassroots development and governance in Ladakh, said Ishey Tsaga, the counselor of the Nyoma constituency, which encompasses 11 villages including Koyul.

Chinese raise red banners and flags to the villagers and tourists gathered to celebrate Dalai Lama’s birthday in Koyul village in the Nyoma sector of Ladakh in India on the de facto border with China, on July 6, 2021.

“India used to have temporary military units here. But now there’s a permanent deployment,” Tsaga told The Epoch Times. He hopes that the deployment will halt the Chinese intimidation of the locals.

Namrata Hasija, a research fellow with the New Delhi-based Centre for China Analysis and Strategy, told The Epoch Times that the incident points to an increasingly aggressive Chinese policy toward Tibet and the Dalai Lama.

“The Seventh Tibet Work Forum, held in Beijing on August 29 to 30, 2020 … [heralded] a tougher regime for Tibetans in China, where the Chinese Communist Party will penetrate into each village and hamlet in the Tibet Autonomous Region,” said Hasija, who speaks and reads Mandarin.

An Indian citizen in this video talks to the Indian government about a Chinese vehicle intruding into the Indian territory in December 2019.

The Chinese people raising red banners and flags could be PLA officers in civilian clothes or Party cadres posted in the border regions, she said.

“There will be a renewed emphasis on adapting Tibetan Buddhism to ‘socialism with Chinese characteristics’ and countering ‘separatism’ and the ‘Dalai clique,'” she said. “[The Chinese regime is] warning citizens from celebrating the Dalai Lama’s birthday.”