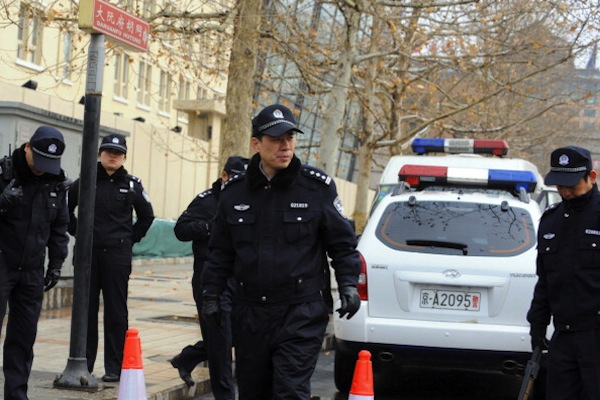 Chinese policemen work at a checkpoint along a street in central Beijing on Feb. 27, 2011. Resignations, corruption investigations, and the pressure of public opinion are getting to the security forces that the Communist Party uses to repress the Chinese people. (Goh Chai Hin/AFP/Getty Images)
China

Given that its budget is a whopping $120 billion, more than is allocated to the military, the Chinese communist regime’s public security system should be riding high. But the forces have seen an unprecedented level of corruption, resignation, sickness, and general low morale recently.

These were highlighted in a number of reports delivered by the Minister of Public Security, Guo Shengkun, to his bosses in the Political and Legal Affairs Committee, the Party agency that oversees the security forces, according to the Hong Kong-based political magazine Chengming.

“Their morale is for sure extremely low now,” said Heng He, an independent analyst of Party affairs based in New York. “The conflict between Chinese people and Chinese Communist Party is getting more and more severe nowadays. The public security system is at the front lines of maintaining social stability, so when the government needs a scapegoat to appease the resentment, public security officials become the targets.”

Three times Guo Shengkun reported “emergencies” due to the high pressure of a heavy workload and extremely negative public opinion. In a report to the State Council this June, according to Chengming, a record number of public security officials have been fired due to breaking the law or getting involved in corruption.

A report Guo delivered to the State Council indicates that the cadres are beginning to feel the pressure. Chengming reports that 12,130 people in the public security system left or were fired in 2012 (the numbers were 11,550 in 2010 and 8,720 in 2011). Among them, 75 were provincial directors, 367 were prefecture-level secretaries or deputy secretaries, while over 1,000 others were lower level bosses. The report said that 15 percent of the culling was due to sickness and injury, while 6 percent simply quit their jobs. Chengming based its report on exclusive information it said it had obtained, which is impossible to independently verify.

But the leaks accord with what is otherwise known about the state of the forces. “From the persecution of Falun Gong practitioners to the whole stability maintenance system, the public security authorities have enlarged their power continuously,” said Heng He. “Until different restrictions on their power recently came out. ”

The retiring of former security czar Zhou Yongkang, which took place late last year during a political shakeup, was the first step. Zhou has also recently been reported to be under an investigation by Party Central for his questionable ties with the felled former Politburo member Bo Xilai. The head of the security forces has since had a much less powerful role than Zhou did.

Secondly, the public security system is losing its most powerful and convenient instrument: labor camps.

“The forced labor camp system has always been a tool for the public security system to detain people without going through judicial procedures. Security officials have for years been opposed to abolishing the system,” Heng He said.

He added, however: “But after the new leadership came to power, some labor camps have quietly been shut down. When public security officials lack this tool, it puts huge pressure on them to complete their work tasks.”

Another proxy for a demoralized security corps can be seen in the enormous level of corruption that is regularly reported. A source in Beijing disclosed to Epoch Times earlier this year that 453 officials at different levels of the Political and Legal Affairs Committee have been arrested and put under Shuanggui, an internal means of investigation and interrogation reserved for Party members accused of corruption, in the past three months.

This militarized style of control means that those in power are able to get away with a great deal, because there are no institutions above them that can keep them in check. When things get out of hand, central security officials are forced to step in.

Thus, Chengming reports, there were nearly 200 cases of local public security officials colluding with triads in the pornography, gambling, and smuggling businesses, according to an investigation by central security officials this year.

There is also extortion in the prison system, which neither the prisoners nor family members can do much about. “There’s very little supervision over prisons, so the officials can do whatever they want in there,” said Chen Yongmiao. “Also, corruption in dealing with drug enforcement is very severe, because there’s no supervision. Sometimes, the police collude with drug dealers.”