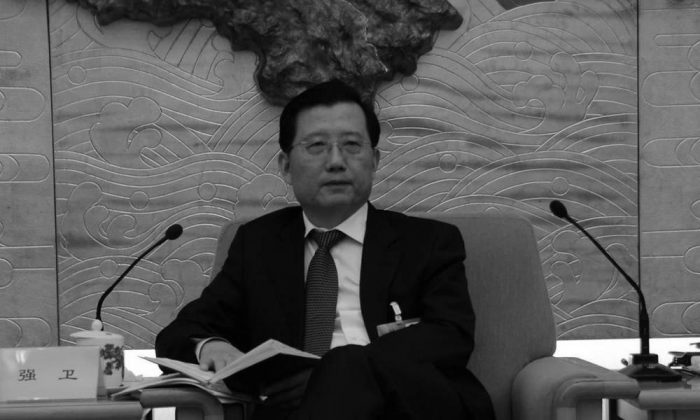 Qiang Wei attended a meeting at the Great Hall of the People on March 6, 2013. Qiang was recently removed from his post as Party Secretary of Jiangxi Province. (People’s Net)
China

According to state mouthpiece Xinhua, Qiang Wei, the Party Secretary of Jiangxi Province in southeast China, was replaced by the province’s governor, Lu Xinshe, due to age reasons.

At the age of 63, however, Qiang still has two years to go before reaching the mandatory age of retirement. It is also the norm for Party officials in Qiang’s position to finish their careers while still in office.

The unexpected replacement of Qiang Wei was in fact inevitable with the anti-corruption campaign going on in China, according to Heng He, a political analyst with the New York-based New Tang Dynasty Television (NTD). NTD and this newspapers are subsidiaries of Epoch Media Group in New York.

“From the perspective of driving out corruption, the elements of powerfully corrupt and conspiratorial factions are definitely key targets,” Heng told NTD in an interview.

In March 2015, Bowen Press reported that Qiang’s younger sister profited from real estate developments in Beijing with the help of Ling Jihua, the former head of the Party’s secretive General Office.

When Qiang was Party Secretary of Qinghai Province from 2007 to 2013, he had allegedly helped Zhou Bin, the son of disgraced former security czar Zhou Yongkang, secure lucrative contracts and large-scale projects, according to Insider Magazine, a publication carried by Mingjing News. Mingjing News is known to trade in high-level political information, of varying degrees of veracity, from Party factions.

Insider Magazine also reported that Zhou Yongkang and Ling Jihua had promised Qiang the position of Public Security Bureau chief after their foiled coup against Xi Jinping in 2012.

Xi has hinted at the coup attempt in a speech last year where he denounced Zhou, Ling, and three other purged officials for having “carried out political conspiracies to wreck and split the Party.” These “ambitious figures and conspirators” belong to the influential political network of former Party leader Jiang Zemin.

Heng He, the political analyst, said that Qiang Wei’s political rise and sudden downfall is linked to his obeying Jiang’s orders to persecute practitioners of Falun Gong, a spiritual practice that was marked for brutal suppression since July 20, 1999.

Qiang was the head of Beijing’s Political and Legal Affairs Commission—a small but powerful Party organ—from 1996 until he was moved to Qinghai Province in 2007. In 2013, Qiang became Party Secretary of Jiangxi.

The World Organization to Investigate the Persecution of Falun Gong (WOIPFG), an international human rights nonprofit, found that Qiang had overseen the persecution of Falun Gong in Beijing, Qinghai, and Jiangxi. For instance, the 246 practitioner deaths and most of the over 9,350 detentions in Beijing took place under Qiang’s tenure as the security and legal chief of China’s capital.

WOIPFG considers Qiang responsible for the persecution of Wang Zhiwen, a former engineer with China Railway Materials Commercial Corporation. Wang was arrested at the beginning of the persecution and only released from prison in October 2014. Prison guards once broke his collarbone during a particularly severe beating, and drove toothpicks under his fingernails, before standing atop the fingers.