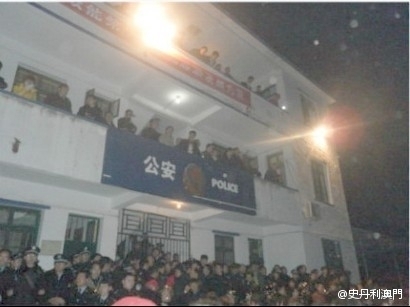 Two villagers were injured in a knife attack by transportation officials trying to collect fees. The incident triggered a mass protest on Jan. 29, 2012 in Qiaotou, Jiangxi Province, with people shouting, “Down with the CCP!” and "Burn the five star red flag!" (By gscmmsb198)
China

Chinese Protesters Shout ‘Down with the Chinese Communist Party!’

Chinese protesters in Jiangxi Province, enraged over a knife attack by government staff that injured two villagers, yelled “Down with the Chinese Communist Party” (CCP) and other anti-regime slogans.

The location of the protest has historical and symbolic significance as it is the site of a former Red Army base and was the starting point of the Red Army’s ‘Long March’ more than 80 years ago.

Nearly a thousand people participated in the protest on the afternoon of Jan. 29, outside the local police station in the township of Qiaotou in China’s northern Jiangxi Province.

Mr. Li, a local resident, told The Epoch Times, employees of the Yudu County transportation supervision department attacked two villagers with knives. The local communist party chief and other government heads came to the protest site, and delivered propaganda speeches to try calming down the demonstrators, but it had the opposite effect.

“People were really disgusted with the officials’ all-talk-no-action approach. They were very emotionally charged and shouting back at the officials. It was very chaotic,” Li said.

One of the protesters told The Epoch Times: “People shouted ‘The CCP is killing people’, ‘Down with the CCP’, ‘Burn the five star red flag’, and more. Some people also tried to hurl bricks at two of the attackers who were hiding in a conference room. Police and officials couldn’t do anything except just watch,” he said.

A democracy activist, who wished to remain anonymous, told The Epoch Times that this protest and other recent demonstrations have special historical significance.

He said 85 years ago, the CCP established its first rural Soviet regime in the County of Lufeng in Guangdong Province, which is the site of recent mass rebellion by Wukan villagers, who drove out the local CCP village government.

“Yudu County was the starting point of the Red Army’s so called ‘Long March’ more than 80 years ago, and today the Qiaotou villagers shouted ‘down with the CCP!’ It looks like the CCP regime can’t last too much longer,” he said.

The Qiaotou incident started in the morning of Jan. 29, around 9 am, when four transportation coordinators, government officials from the local long-distance bus station, came to collect transportation management fees and got into an argument with transport contractors. During the dispute, the coordinators allegedly slashed two contractors with knives.

Local residents came out in the afternoon and demanded punishment of the assailants, but were further angered by Yudu County officials giving them empty propaganda-type speeches. Large numbers of riot police also showed up. People overturned some of the coordinators’ cars and one police car as well. Officials eventually agreed to detain two transport coordinators.