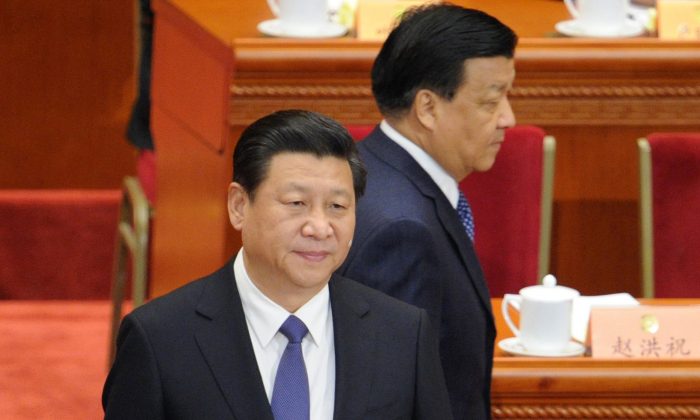 Liu Yunshan (top), a member of the Standing Committee of the Political Bureau of the Communist Party of China (CPC) Central Committee, walks past Chinese president Xi Jinping as they arrive at the opening session of the Chinese People's Political Consultative Conference (CPPCC) at the Great Hall of the People in Beijing on March 3, 2014. (WANG ZHAO/AFP/Getty Images)
China

In China, the popular Internet idiom “advanced blackening” has been used to describe a defamatory tactic in which a sentence of praise actually hints at discredit. During the period of the recent Two Sessions, the annual political meetings of the Chinese regime, the phrase has frequently been used to describe how the Chinese Communist Party’s (CCP) propaganda department abnormally discredits Party leader Xi Jinping.

In early March, a song called “The East is Red Again,” adapted from the communist “red” song “The East is Red,” appeared on the mainland Chinese Internet. The latter was used to extol Mao Zedong many years ago.

“The East is Red Again” has exactly the same melody as the original. There were only minor changes to the lyrics, and the words “Mao Zedong” were replaced by “Xi Jinping.”

The song mentions that “Xi Jinping inherited Mao Zedong,” and the original word “saviour” was changed to “lucky star.” The video’s main screen is of Xi inspecting the army during a military parade and visiting rural areas.

On March 9, Radio Free Asia reported that the song became hot as soon as it was introduced to the Internet, but it received one-sided adverse comments. Some netizens stated that there was a feeling of “advanced blackening.”

The song was soon deleted by the authorities.

Since the second half of last year, both the Chinese government and civilians have launched intensive “red” songs touting Xi, such as “If You Marry, Then Marry Xi Dada,” “Do Not Know How to Call You,” “National Icon Xi Dada,” and so on.

Xi Jinping is the highest leader, but the departments under him are still controlled by the Jiang faction.
— Xin Ziling, Former Chinese Military Publishing House director

On March 10, the overseas Chinese media Mingjing News quoted a news source close to the Beijing senior level as saying that Xi is “very dissatisfied” with the propaganda system’s nauseating flattery, and he clearly requested, “Do not call me Xi Dada.”

Xi was not the only one to experience “advanced blackening.” His wife, Peng Liyuan, also encountered it.

This is the same as Peng Liyuan’s sister’s name. This immediately drew the attention of Chinese people.

There was a rumour that Peng Liyuan’s sister had been transferred to CCTV and become a producer, and she would take the lead to control CCTV’s cultural and arts department. This triggered a public outcry, and some used this to attack Xi and his wife.

Bowen Press stated that CCTV’s Peng Lijuan is not Peng Liyuan’s sister; she only has the same name. Bowen Press added “Public opinion and speculation went up so high, but CCTV and other departments pretend to be deaf or ignorant on the matter. They just wait and see Xi Jinping and his wife become the scapegoats. Anyone with basic common sense can understand; this clearly implies certain people’s hidden motives of ‘advanced blackening'”.

On March 13, the CCP mouthpiece Xinhua News Agency published an article titled “Reporter’s hand notes: looking for China’s economic confidence from inside and outside Kuntai Hotel.” The report has the phrase “China’s last leader” in the text.

Later, Xinhua’s original report was removed. The Chinese media company Sina reprinted “China’s last leader” as “China’s top leader,” but many other official websites reproduced the same wording and did not modify the text for a long time.

It is not clear whether this suggests a hidden incident.

The Jiang faction’s tricks will not affect the big picture.
— Xin Ziling

Inside China, a series of incidents happened recently, indicating that Xi’s faction and the faction of his rival, former CCP leader Jiang Zemin, have entered the final confrontation stage.

On Feb. 19, Xi inspected the CCP’s three main media, and then the Central Commission for Discipline Inspection (CCDI) had staff stationed at the Central Propaganda Department.

Wang Min, deputy chair of the National People’s Congress in charge of the Education, Science, Culture, and Public Health Committee, was abruptly arrested during the Two Sessions period.

Former Chinese Military Publishing House director Xin Ziling believes that the recent series of incidents aiming to “blacken” the names of Xi and his wife have even drawn the attention of overseas media, which obviously reveals the Jiang faction’s scheme to discredit Xi.

Xin said that since Xi came to power, the CCP’s propaganda department has been deliberately playing a different tune toward Xi, putting him in the position of “Left-wing Mao” and purposely distorting his speeches.

Xin said that Liu Yunshan is in charge of propaganda work, and he was promoted by Jiang Zemin directly.

“Xi Jinping is the highest leader, but the departments under him are still controlled by the Jiang faction. These people have different political orientations. What they are trying to do is make Xi Jinping a scapegoat,” Xin said.

Xin also believes the Jiang faction’s tricks will not affect the big picture. He said cleaning up the Jiang faction is the historical trend, and the Central Propaganda Department and Liu Yunshan will be the first to bear the brunt.

Through multiple channels, Xi’s authorities have released many signals indicating dissatisfaction with the propaganda department. News reports have said that the head of the Propaganda Department, Liu Qibao, will be sacked this year, and the position of Jiang Jianguo, the deputy director of the Publicity Department, is also at stake.

“The Central Propaganda Department certainly will be reshuffled,” Xin said. “It is hard to say whether Liu Yunshan can complete his term in office.”

Retired Shandong University professor Sun Wenguang believes the incident reflects the divisions within the Chinese government, and someone has deliberately tried to undermine Xi.

For example, after Ren Zhiqing said that it is inappropriate for the CCP to control the media, the Central Propaganda Department quickly sanctioned him, but very soon the punishment stopped. This implies a division over the major issues within the CCP’s top level.