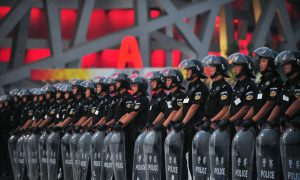 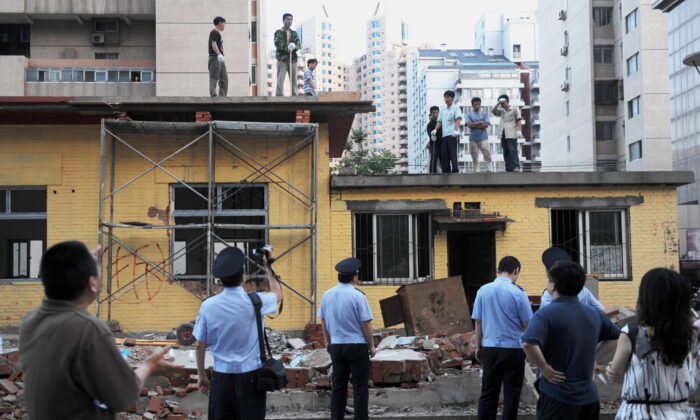 Chinese police film workers demolishing a group of buildings. Local residents claim the land belonged to their community and was were illegally built upon by a property company, in Beijing on May 31, 2010. (STR/AFP via Getty Images)
China Society

A professor at Sichuan Normal University was found dead on the school’s campus in mid-January. Although local authorities have ruled out foul play, those who were close to the victim believe that his death is related to the recent forced demolition of his properties.

The local police and the university have confirmed Tuo’s death on Jan. 18. A statement released by the university said that local authorities have ruled out criminal activity and the incident is still under investigation.

Tuo Jiguang, 50, has been a professor at Sichuan Normal University since December 2010. His research was mainly focused on communication studies, and he has published over 200 journals.

Tuo’s wife, Li Ying, told Chinese media Jiemian News that Tuo fell off from the 10th floor of the Tianjiabing Building on the university campus at 8:14 a.m. on Jan. 18.

Tuo’s family and friends believe his death is related to the forced demolition of his properties by local authorities. They wanted to use the land for a redevelopment project. In October 2020, Tuo filed a complaint against the mayor of Chenghua city, Pu Fayou, alleging that he abused his authority in carrying out orders to forcibly demolish Tuo’s properties.

Chinese scholar Zhan Jiang shared Tuo’s complaint letter on Chinese web portal Sina on Oct., 24, 2020. According to the file, Tuo and his family own two properties in Chenghua district. Since 2011, a demolition team has been ordered by the district to coerce Tuo into giving up his properties and signing them over to the local authorities. They used various intimidation tactics on Tuo, including threats, and getting his workplace to apply pressure on him, according to the complaint.

Despite Tuo’s efforts, Pu went ahead and ordered the two properties to be demolished without compensation or a resettlement agreement. Pu did not notify Tuo and his family in advance. According to Chinese law, the property can only be demolished after the evictees signed the agreement and the compensation was paid.

Under communist rule in China, all land is owned by the state. When Chinese citizens buy a home, they are only leased for a certain period. Over the years, this has resulted in millions of Chinese losing their homes through forced demolitions and forced relocations of villages and towns when local governments decided to reclaim the land for more profitable use.

According to a report by Chinese media Yangtze River Daily, Li said that her husband, who is a postdoctoral researcher in journalism and law, was depressed after the forced demolition. Tuo told his wife, “We studied law, studied journalism, but we cannot defend our rights.”

Before teaching at Sichuan Normal University, Tuo was a reporter and editor at two of the largest local newspapers, West China Metropolis Daily and Chengdu Economic Daily, according to a report by Radio Free Asia (RFA).

A media worker and former colleague of Tuo, surnamed Chen, told RFA that Tuo holds two post-doc titles. He believes that Tuo’s tragic death is a reminder of the Chinese regime’s oppression. “From Tuo’s experiences, we can see how crafty the government is. On the one hand, they reason with you, and on the other hand, they use gangsters to get what they want.”

Many citizens have attempted to appeal to authorities about their forced evictions and illegal land grabs, but they have little bargaining power in China. Tang Fuzhen, a resident in Jinniu district of Chengdu, died of self-immolation in protest over the forced demolition of her home in 2009.