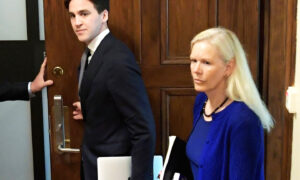 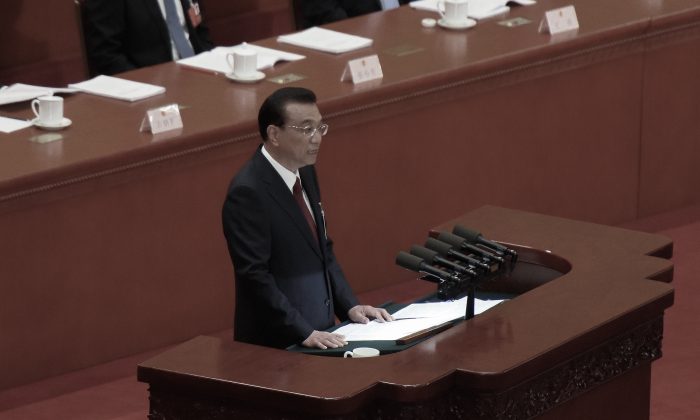 His speech delivered at the Congress’s opening session stressed stable growth, the need to combat unemployment, and the strengthening of China’s military. Below are some major takeaways from Li’s speech:

Li announced the regime’s aim to expand China’s economy by 6.5 percent in 2018, the same rate as last year.

The number stayed the same even though China’s economy grew by 6.9 percent last year, exceeding the target—suggesting that the Chinese regime wished to be cautious and reduce financial risks. Last year, Li made a speech mentioning this target number, adding that “in actual work, [we will] strive for an even better result.” The omission of this during Li’s work report indicates the Chinese regime is not confident it can go for a higher target.

Economists predicted that China’s economy would lose some momentum this year as the regime seeks to contain a buildup in corporate debt, while pollution-fighting efforts and a cooling property market weighed on Chinese manufacturers.

Also on March 5, China’s Ministry of Finance unveiled a report at the Congress opening session, announcing that the Chinese regime plans to increase its military spending by 8.1 percent this year, bumping up its defense budget to 1.107 trillion yuan (about $175 billion). This is the biggest uptick in the past three years.

China’s defense budget is second only to that of the United States. At $686 billion for fiscal year 2018 to 2019, America has the world’s largest military budget. But China’s still dwarfs other nations. According to a recent report by the International Institute for Strategic Studies, Saudi Arabia ranks third at $76.7 billion, followed by Russia ($61.2 billion) and India ($52.5 billion).

On March 6, at a press conference in Tokyo, Japan, commander of the U.S. Navy Pacific Fleet Admiral Scott Swift said China’s military budget lacked transparency, noting that the country’s “intent is not clearly understood,” he said. The Chinese regime did not provide a breakdown of its budget.

China’s Asian neighbors also expressed concern. Japan’s Chief Cabinet Secretary Yoshihide Suga said at a press briefing, “We would like to see China be more transparent about its defense policy, including spending and the direction of its military power.”

Analysts say the Chinese authorities often underreport their budget figures. Bruce Lui, senior lecturer in the journalism department of Hong Kong Baptist University, told Radio Free Asia (RFA) that some spending, such as in the area of military technology research, is not counted toward the defense budget, but as “science and technology” expenditures.

Meanwhile, the Ministry of Finance also revealed 2018 budget figures for “public safety expenditures,” a euphemism for efforts to curb dissent—from censorship to civilian arrests. That number grew 5.5 percent compared to the year prior, to over 191.91 billion yuan ($30 billion). Lui, the university lecturer, told RFA that the real figure is probably higher, because it does not include local government spending. If those figures were aggregated, he estimates they would total more than a trillion yuan ($158 billion).

The increase also suggests that the Chinese regime has plans to further stamp out dissent and perceived threats to its legitimacy. In the same RFA report, a Chinese petitioner—a citizen who brings grievances to the central authorities seeking justice—worried that the increased budget meant more arrests of petitioners. “In Beijing, no matter where you are, [the authorities] will be sure to catch you and send you back,” the petitioner said.

On Twitter, The Economist journalist Simon Rabinovitch observed the unusually high number of references to Party leader Xi Jinping in Li’s speech: a record number of 15, compared to 9 times in 2017 and 6 the year prior.

Big increase in references to Xi Jinping at the opening session of China's National People's Congress: not surprising but still striking. pic.twitter.com/6qAHR9vOB1

In March 2017, Radio France Internationale looked into past Congress work reports and found that only two other Party leaders received more than 10 mentions: Mao Zedong in 1975 (17 mentions) and Deng Xiaoping in 1997 (11 mentions). The increase in mentions is seen to be a testament to Xi’s superior position of power within the Party.