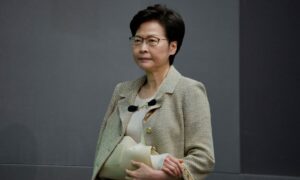 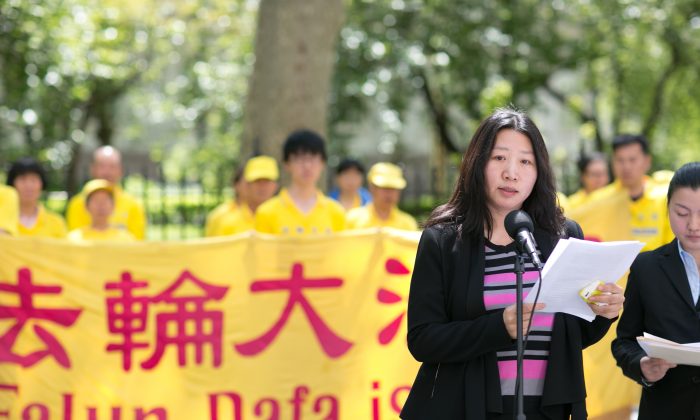 Lu Shiyu tells her story at City Hall in New York on May 11, 2016, of how she was persecuted inside China for practicing Falun Gong. (Benjamin Chasteen/Epoch Times)
China

NEW YORK—In the first of a series of public activities here this week, over two hundred practitioners of Falun Gong, the traditional Chinese spiritual discipline, stood outside City Hall on May 11, listening intently to the testimonies of survivors of the brutal persecution against the meditative practice in its homeland.

The eight witnesses—most of them speaking in Chinese with English interpretation—came from a cross-section of backgrounds that was representative of typical Chinese Falun Gong practitioners: educated, urban, and middle-aged or elderly.

Those who practiced Falun Gong reported experiencing dramatic health improvements and becoming more moral and upright people. By 1999, the year the Chinese Communist Party banned the practice, tens of millions of Chinese were practicing the exercises and reading the books of Falun Gong’s teacher, Li Hongzhi.

There was a wife whose husband was disappeared by the communist regime just before he would have left the country to rejoin her in New Jersey, and a wealthy factory manager whose upper-class background didn’t hold sway in a situation where he was defending his faith. Another was an elementary school teacher, kicked out of her job and driven to divorce.

The accounts solemnly recounted the lengths to which the Chinese regime is willing to go to destroy Falun Gong, and the sacrifices practitioners are ready to make for the right to choose their own belief.

A Shanghai resident, Yang Xiaoping, started practicing Falun Gong in 1995. In 2001, he was arrested and sentenced to 2 years in a labor camp. Hardened criminals were mobilized by the guards to torture and put pressure on Falun Gong practitioners in order to “transform” them.

Yang recounted how three men being held for drug use forced him to sit in excruciating positions for hours on end, while saying that they represented the law, and were acting on the orders of China’s then-leader Jiang Zemin.

“We can hound you unrepentant Falun Gong practitioners to death,” Yang recalled one of them saying. “We can do whatever we want to you. The sky is Jiang’s sky, the law is Jiang’s law. We get rewarded for smashing you.”

Tang Zhiheng, a general manager at a profitable handbag manufacturing plant in Guangdong Province, described how the persecution affected people regardless of economic class.

“We were making tens of millions of yuan a year, and I was in the upper rung of Chinese society,” he said. “In these 17 years of communist repression, I suffered multiple beatings, brutal and inhumane forced feeding, and two years of illegal incarceration in a forced labor camp.”

Aside from slave labor, Tang was constantly threatened, beaten, prevented from sleeping, and forced to write “thought reports” to show progress in turning away from Falun Gong.

“My cellmates feared that my life was in danger,” Tang said. “The prison guards said, ‘A death means suicide, we have nothing to worry about. We’ll wait for him to pass out and then revive him.'”

Wang Fuhua, an elementary school teacher who credited Falun Gong with helping her overcome multiple severe illnesses, was not only physically abused by the authorities, but was socially persecuted as well. She lost her job and her husband divorced her soon after the anti-Falun Gong campaign began.

“In the short space of one year, I was completely robbed of a normal life,” she said. Police detained her six times, then sentenced her to two and a half years in a labor camp. When this sentence ended, she was forced to attend a 20-day brainwashing class.

Passers-by on the warm sunny day were appalled to hear about the persecution of Falun Gong practitioners in China.

“It’s actually quite horrifying,” said Lisa, a woman who was taking a break from her volunteer work across the street. “To know that there are places in the world where people can be persecuted and tortured and imprisoned simply for wanting to attain inner peace, I just find that astounding.”