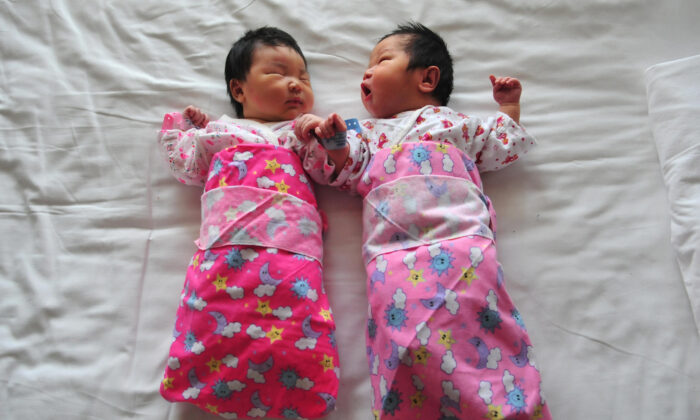 A member of the Chinese regime’s top political advisory body on March 4 put forward a proposal to allow single women over the age of 30 to have one child due to China’s declining population. But it was met with public criticism.

On Friday, when China’s annual political meetings, called the “Two Sessions,” kicked off, Hua Yawei, a delegate of the National Committee of the Chinese People’s Political Consultative Conference (CPPCC), called for allowing unmarried women over the age of 30 to have one child.

He also said that healthy women over the age of 30 should be allowed to undergo voluntary egg retrieval and freezing, artificial insemination, in vitro fertilization, and other fertility procedures, according to a March 5 report by Minsheng Weekly, a state-run journal designated by Beijing to cover the “Two Sessions.”

Every year, the CPPCC convenes in March for one or two days, followed by meetings of China’s rubber-stamp legislature (the National People’s Congress, or NPC for short). At the “Two Sessions,” CCP officials lay out various policies for the coming year, including economic growth targets.

According to public information, Hua is currently the vice president of Henan Anti-Cancer Hospital and a member of the central committee of the Chinese Peasants’ and Workers’ Democratic Party.

His proposal has caused a backlash among Chinese citizens.

Ms. Wu (pseudonym), a former employee of the Industrial and Commercial Bank of China, was furious after hearing about the proposal.

“Where does the sperm come from for a single woman to have a baby? Is it legal? On top of that, these children’s future will be a big problem, and it is a humanistic, moral, and legal issue,” she said in a recent interview with the Chinese-language edition of The Epoch Times.

Mr. Gu (pseudonym), a retired university teacher in Shanghai, told the publication that Hua’s proposal is a reasonable and legal excuse for CCP officials to allow their mistresses to have their children, thus creating a loophole for China’s marriage law.

“The government officials are looking for legal legitimacy for their mistresses to have children out of wedlock. This is a serious violation of the CCP’s marriage law, and it will cause chaos in the social order. The destruction of the marriage law is not desirable,” he said.

Gu added that the CPPCC members and NPC deputies “are not elected by the people and do not reflect public opinion at all.”

“They represent the CCP and speak for it. Their holding such a meeting has nothing to do with us ordinary people.”

Hua’s proposal is in line with the CCP’s current demographic policy.

Amid the plummeting population growth rate, Beijing has introduced a number of policies to encourage couples to have more children. But an increasing number of women don’t want to have children.

It mentions that the association will “focus on solving the outstanding problems of reproductive health of teenagers, women of childbearing age, and other specific groups of women, and launch a special campaign to intervene in abortions among unmarried people, and reduce unwanted pregnancies and abortions among teenagers.”

The hashtag “intervening in abortion among unmarried people” has been a popular search topic online.

According to the CCP’s top health body, the National Health Commission (the NHC), the total number of abortions per year in China has been over 9.6 million for the five years between 2014 and 2019. The number of abortions among unmarried women under the age of 24 accounts for 40 percent of all abortions in the country, according to a February report on the CPPCC’s official website.

Political commentator Zheng Jie told The Epoch Times that the Family Planning Association of China report uses the excuse of reducing unwanted teenage pregnancies and abortions, and improving the reproductive health of the public, as a pretext for the ineffectiveness of the three-child policy.

Zheng said the intervention in abortions among young women shows that the CCP wants to change the status quo through coercive means, in a bid to boost population growth numbers and to slow down the aging trend of the Chinese population.

According to the National Bureau of Statistics (NBS), the country’s population growth in 2021 was 480,000, which was at a record low since 1962, as tens of millions of people died in a massive famine during the Great Leap Forward from 1958 to 1962.

China’s population began to increase again after the famine, and since the late 1970s, the CCP has strictly enforced a one-child policy, with sterilization, forced abortion, financial punishment, and forced unemployment being the common measures implemented by the regime’s local governments.

Since the CCP’s one-child policy, China’s population saw a declining trend. According to the NBS, the third census in 1982 showed an annual average growth of 17.4 million people from 1964 to 1982, with an annual growth rate of 2.1 percent. From 2000 to 2010, there was an average annual increase of 7.3 million people, with the annual growth rate dropping to 0.57 percent.