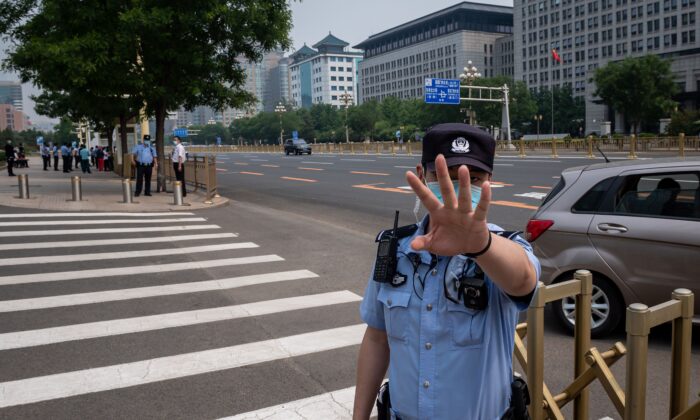 A police officer secures an area and gestures before a convoy of buses transporting delegates passes by ahead of the opening ceremony of the Chinese People's Political Consultative Conference (CPPCC) in Beijing on May 21, 2020. (Nicolas Asfouri/AFP via Getty Images)
Chinese Regime

A Chinese police bureau has set up dozens of “service stations” overseas, including three in the UK and one in Ireland, according to a new report.

The report, published on Monday by human rights NGO Safeguard Defenders (pdf), says that the stations, dubbed “110 Overseas” after the national police emergency phone number, are part of a programme piloted by the Fuzhou Public Security Bureau (PSB).

By June 21, there were 38 stations across five continents, the report said, citing a Chinese language news article, which also said the programme had received more than 2,100 calls from 88 countries or regions by June 14.

The so-called stations appear to be local phone numbers that overseas Chinese people can call to access services such as document renewal or to report cases such as fraud to PSB officers in China.

Safeguard Defenders cited a Chinese language news report published in January, which enclosed a list of numbers and addresses of the 30 “first batch” stations.

The Epoch Times wasn’t able to get through to the Dublin supermarket on Monday, but a staff member at the Glasgow restaurant confirmed to The Epoch Times in a phone call that the Chinese police phone line is registered at the address, but said it was “in name” only. It’s unclear whether the restaurant has any more involvement in the programme.

There are also two stations in London. One of the addresses appears to belong to an estate agent, but it’s unclear what is at the other address.

“While not the object of this investigation, at first glance at least some of the associations abroad are tied to the United Front system,” Safeguard Defenders said, referring to Beijing’s United Front Work Department, which oversees the Chinese Communist Party’s (CCP’s) foreign influence operations.

The report went on to name the French Fujian Federation of Industry and Commerce and the Shiyi Hometown Association in Fuzhou, also in France, as examples.

Not All Targets of Anti-Fraud Campaign Are Guilty

The report also said the “110 Overseas” programme was set up after the launch of “a massive nationwide campaign to combat the growing issue of fraud and telecommunication fraud by Chinese nationals living abroad” in 2018.

Authorities of the communist regime claimed that 230,000 Chinese nationals had been “persuaded to return” to face criminal proceedings in China between April 2021 and July 2022.

CCP mouthpiece Xinhua News Agency said some local authorities combed every household to document the whereabouts of people, before “doing everything possible” to persuade fraud suspects living overseas to return.

According to other Chinese media reports, authorities made announcements threatening to freeze targets’ assets, remove their civil registrations, or tank their credit rating unless they returned. Some local authorities also used “guilt by association” tactics, barring targets’ family members from education and careers in the military or the public sector.

“Local officials went door to door in their investigation of fraud suspects. Not only by posting ‘wanted’ notices but also by all sorts of threatening tactics, including spraying their home with the words ‘home of a fraud suspect’ with red paint,” one report boasted.

According to Safeguard Defenders, innocent people have also been targeted with these tactics because they live in one of nine “forbidden” countries that are designated by the authorities as hotbeds of fraud.

Apart from fraud suspects, dissidents in China and overseas have long reported being targeted with similar tactics.

Safeguard Defenders argued these long-arm policing operations by the Chinese authorities “eschew official bilateral police and judicial cooperation and violate the international rule of law, and may violate the territorial integrity of third countries involved in setting up a parallel policing mechanism using illegal methods.”

The Epoch Times has contacted the UK and Irish governments for comment.