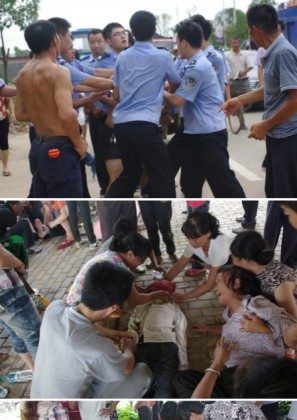 Photos uploaded on the Tencent microblogging site show family members gathered around purportedly children who died after drowning in a river in the Chinese city of Fuzhou. Other photos show police apparently attacking crowds of people who gathered. (Tencent QQ)
China

Three school children drowned in a river in the eastern Chinese city of Fuzhou late last week, because local police were not willing to rescue them until family members were able to pay, according to an account of the incident online that provoked an outcry.

When relatives arrived to retrieve the bodies they were beaten by police, and one person was arrested; a police officer tried to steal jewelry from another, before the police took away the corpses to destroy the evidence. The incident, once exposed online, sparked a new round of outrage at the regime and its system of law enforcement.

The events took place on Aug. 11, and were soon mentioned in a blog post on the popular Tencent Weibo, or microblog, by a user with the name Chen Xin.

Chen said the children were around 12 years old, and fell into a river in Zhongzhou Park in Linchuan District of Fuzhou City, which is located in Jiangxi Province.

The police, the blogger said, arrived 40 minutes after they were called, and made no attempt to rescue the children.

A user on the Tianya web forum said that police took no action until around 6 p.m. when a small boat arrived. They searched for a short time, but called off the search, saying they would return the next day at 6 a.m. The Tianya user said, however, that police did not actually arrive on the scene until 9 a.m. when they took the three bodies out of the river.

Before the children drowned, relatives got on their knees and begged the officers to save their children, the Tianya user said in the post. But the police responded by demanding payment from them.

“The families said: ‘Save them first and after they’re saved, we’ll surely pay the money,'” the forum user said.

By this time, crowds of people had gathered at the site, and hundreds of police were deployed to disperse them, the user added.

Chen Xin, the Tencent Weibo user, said the victims’ parents arrived the next day to take away the bodies, but were stopped by police, who beat them severely. They also beat local farmers who were trying to quell the dispute.

The police later “insisted on taking the bodies so they could destroy evidence to evade responsibility,” Chen Xin said.

A local Linchuan resident, who declined to be named for security reasons, told The Epoch Times that the “police needed at most 10 minutes to arrive on the scene” and rescue the children.

He confirmed the web postings that the parents were beaten, some until they bled, citing a classmate who saw the incident. He said the police in Linchuan have “a bad reputation and are no different from thugs.”

An Epoch Times reporter called the local police station in Linchuan and was answered by a police officer who declined to provide his name.

The officer denied that the police arrived late, let the children drown, and took away the bodies, but said, “We cannot talk to you about this.”

In recent months, the Chinese public has been spreading information on popular China-based microblogging services about various scandals involving corrupt police and government officials, including the picture of a woman and her dead fetus on her bed next to her in June, after local authorities forcibly aborted the baby at seven months of pregnancy.