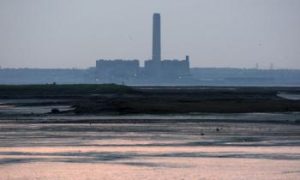 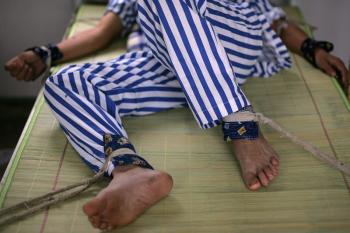 A patient strapped to a bed in a Chinese psychiatric hospital. (China Photos/Getty Images)
China

Although Beijing has always denied charges of psychiatric abuse of dissidents, the National Conference of Ankang Asylums held by the Ministry of Public Security in Wuhan, Hubei Province, on May 26 and 27 has inadvertently admitted these charges.

Ankang Asylums are special psychiatric hospitals administered by the police. According to a document issued by the Ministry of Public Security on January 29, 1988, Ankang hospitals serve two functions: to maintain social order and to provide medical treatment. The document also points out that Ankang hospitals, as a special means of maintaining societal control, are an integral part of the public security services.

As of now, there are 22 Ankang hospitals in China, and the ministry has asked that at least one Ankang asylum be set up in each province, according to a report in state-run China Daily on May 29.

The recently-held National Conference pointed out that Ankang hospitals should play a more important role in social surveillance and control, and that they should work closely with public security bureaus, police stations, and criminal investigation units. It also stressed that Ankang hospitals should not admit anyone who is not mentally ill “without the approval of public security bureaus.”

People from mainland China read it as an indirect admission that Ankang hospitals can detain perfectly sane people as long as it is approved by the police. They comment that, in the past, police have incarcerated mentally healthy petitioners into psychiatric hospitals without a word. Now they send out a warning.

News broke on April 25 that a peasant named Xu Lindong from Henan Province was locked up in a mental hospital for six and a half years for supporting his neighbor Zhang Guizhi in a land dispute between Zhang and the township government. He was shackled 48 times and given electric shocks 54 times during his incarceration.

Ding Hongyun, deputy head of the Psychiatric Hospital of Luohe in Henan Province explained that Xu was incarcerated because of his insistence on visiting Beijing to lodge complaints against the local government, thereby disrupting social order, according to a China Youth Daily report.

Yangcheng Evening News reported on April 9 that Peng Baoquan and Deng Fuhua, two residents of Shiyan, a city in Hubei Province, were detained in a mental hospital because they took pictures of a protest.

According to Civil Rights and Livelihood Watch, on April 22, 2009, Pan Xiang, a citizen of Baoying County, Jiangsu Province, was kidnapped by local police and detained in a Yangzhou psychiatric hospital for nearly two months. Pan had asked the authorities to provide him with a letter allegedly written by Wen Jiabao in response to an earlier letter sent by Pan. He was forced to take medication, and as a result of an allergic reaction, developed edema in his legs.

On March 11 during the 13th United Nations Human Rights Council Conference, the Falun Gong Human Rights Working Group (FLHRWG) presented the “Report on the Psychiatric Torture of Falun Gong Practitioners by the Chinese Communist Government,” which includes 1,088 cases of psychiatric tortures involving injections of nerve-damaging drugs and over 200 hospitals that have participated in the medical tortures. At least 10 practitioners died in psychiatric hospitals, with an additional eight seriously injured and who died shortly after their discharge.

The book, Psychosis: The Social Disorder of China's Mental Disease, published by the Civil Rights and Livelihood Watch in Feb. 2009, documents 81 cases of psychiatric abuse of more than 100 mentally healthy persons, mostly petitioners in China.

Chang Boyang, a human rights lawyer in Henan Province who has taken up Xu Lindong's case, said, “This is not an individual case but a common phenomenon that has become particularly serious in recent years.” In his judicial advice to the Supreme People's Procuratorate, he commented that psychiatric internment is a commonplace measure adopted by local governments to persecute petitioners, and that no small number of sane citizens have suffered such abuses.

Over 100 Chinese lawyers are supporting Chang in a signed petition.