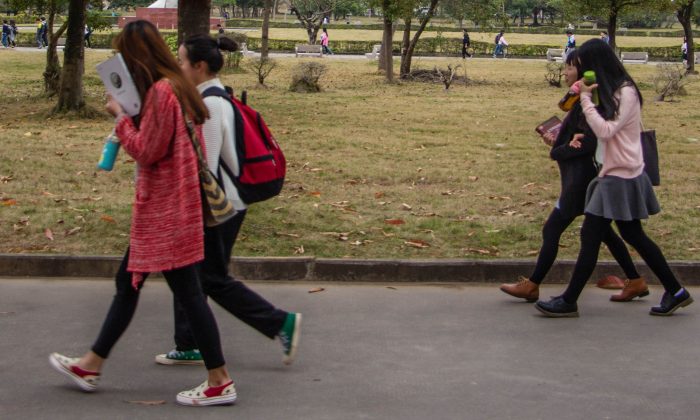 A man threatened to harm his two children with a knife and a lit cigarette while recording the incident on his phone, all in an attempt to get his wife to return back home after she left him, according to multiple Chinese news outlets. However, Chinese police didn’t take the man’s threats seriously.

The wife left her husband on July 10 after suffering on-going domestic violence, but the children were unharmed, the report said.

The unnamed husband was later detained on an unspecified date, and his wife vouched for him to be released from jail in China’s Huizhou City of the southern Guangdong Province, according to a July 29 report from Red Star News.

Despite a video shared online, which shows the 13-year-old daughter screaming in terror, Chinese police spoke defensively of the father and said the children were not harmed. “Her husband intentionally staged this recording,” an anonymous employee at the Huidong Public Security Bureau told The Beijing News.

The official from the local police department said that the man had an argument with his wife on July 10. She left the house, and did not return. The next day, in a fit of anger and in an attempt to make his wife return home, the man recorded the videos of him threatening the children.

The videos show the man, apparently holding the cellphone and recording, yelling and threatening his children in various ways. Most of the videos focus on the daughter, who was wearing a white lace dress.

The father yells repeatedly at her, either brandishing a blade in her face, or saying that he’d press a lit cigarette onto her skin. In both of these instances, he seems to aggressively approach her with both of the objects, and the young girl’s response is enough to believe his intent.

The girl screams in absolute horror as she recoils away from him, holding herself in a fetal position.

When the father approaches his daughter with the knife, the girl falls back on the ground and attempts to shove his hand away. At times, he nearly touches her chest with the blade.

The girl’s brother is also in the video, dressed in a black t-shirt, but he only sits or stands by his sister.

After the threats were recorded, the father shared the videos on WeChat on July 11, the largest chat app used in China.

Social media users likely reported the incident to the police, since the man and his wife were taken to the local police station on July 12.

The wife then vouched for the husband’s release, an anonymous official from the department told the Beijing Times.

Despite the girl’s terrified reaction to her father’s threats, the police emphasized that the children were unharmed and treated the situation as if it was no big deal. “The cigarette didn’t touch them at all, so it was staged,” then unnamed officer told the Beijing News. “His staged recording was to make his wife come back home.”

The father was only given “critical education,” which amounts to nothing more than a warning in China, the reports said.