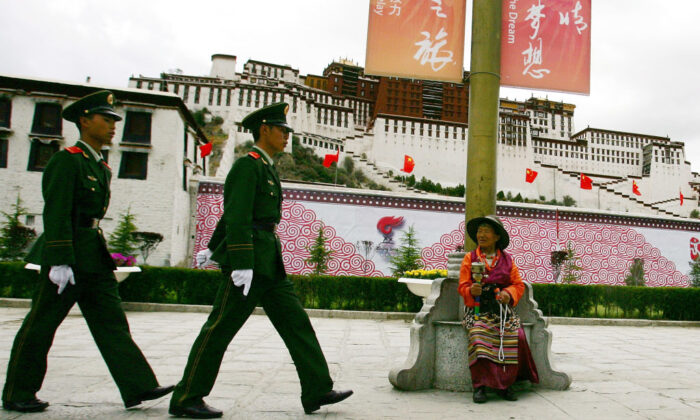 The Chinese regime has been conducting mass systemic DNA collection on Tibetan civilians, with up to 1.2 million samples collected over the past five years, according to the University of Toronto’s Citizen Lab.

Published on Sept. 13, the study analyzed 100 publically available sources, including 44 reports containing figures of the number of DNA samples police had collected in particular areas of Tibet.

“Our research suggests that mass DNA collection is a form of social control directed against the Tibetan people,” the study said, noting police have targeted men, women and children for DNA collection “outside of any ongoing criminal investigation.”

“In some cases, police have targeted Buddhist monks,” it said.

Chinese authorities often justify their collection of DNA samples and other biometric identification data like fingerprints and facial scans on its people as a crime prevention measure, according to the study.

“Political repression against ethnic and religious minorities like the people of Tibet, as well as civil society activists and political critics, is often justified in terms of fighting crime,” it said.

“Authorities have used anti-crime campaigns in Xinjiang to crack down on Uyghurs and other indigenous people. Elsewhere in China, authorities have used the courts to charge feminist activists, labour activists, and human rights lawyers with ‘picking quarrels and provoking troubles,’ ‘disturbing public order,’ and ‘subversion of state power.'”

The Citizen Lab’s report follows a Sept. 5 report from Humans Rights Watch that found the DNA collection in Tibet has targeted children in kindergarten, with some collection drives specifically targeting boys aged 5 and older.

The study noted Tibetans have been targeted for “intense state repression,” since the ruling Chinese Community Party (CCP) invaded the regions in the 1950s, with subsequent violent crackdown campaigns launched in 1987 and 2008.

Repressive measures include the “mass surveillance of entire communities, restrictions on religious worship, the arrest of Tibetans for criticizing state language policies” and for supporting its spiritual leader in exile, the Dalai Lama.

The Citizen Lab said many Chinese forensic scientists have conducted research that aligns with the CCP’s domestic security concerns, including genetic research focused on people from ethnic minority communities like the Tibetans.

One example cited in the study is a 2017 article published by the scientific journal Human Genetics, in which it said “police-affiliated researchers” of genetic diversity collected approximately 38,000 DNA samples from men, including Tibetans and Uyghurs. The journal retracted the article in 2021 out of concern for the lack of clear consent from the study’s participants.

It also noted that since 2012, Chinese public health authorities have conducted annual physical exams for almost all residents of Tibet, with 3 million receiving medical checks in 2017 alone, adding that “numerous reports indicate that these exams also include the collection of blood samples.”

The Citizen Lab study said the Chinese police’s collection of “basic information”—including personal ID numbers, text messages, banking information, and biometric data like vocal scans and DNA samples—is not unique to Tibet, with the creation of a national police-run population information system dating back to 2015.

The study cited a 2015 article, published in the Chinese academic journal Forensic Science and Technology, which said basic information systems are meant to “integrate existing police databases (of people, fingerprints, DNA, etc.) into a single system, to address the problems of incomplete, inaccurate, or duplicated data, and to facilitate data collection and sharing between public security organs across China.”

Starting in the early 2000s, the Chinese Ministry of Public Security, China’s national police agency, has sought to create a forensic DNA database, which accrued 68 million DNA samples as of 2018.

In recent years, China’s police have begun collecting DNA from “entire populations,” the study said, “specifically targeting Uyghurs and other indigenous people in Xinjiang and from tens of millions of men across China.”

It cited an annual free public health program launched throughout Xinjiang in 2016 dubbed “Physicals for All.” The physical exam reportedly included collecting DNA samples, fingerprints, and iris and facial scans from Xinjiang residents aged 12 to 65, according to a 2017 document from Aksu’s prefectural government. The program was visited 53.8 million times by 2019.

“DNA collection by the police and other authorities also accompanied the mass detention of perhaps one million people in the region,” the report said, noting authorities have previously denied the “Physicals for All” program included DNA collection.

“While the total number of DNA samples collected by authorities in Xinjiang is unknown, it is estimated to be in the millions.”

The Citizen Lab study concluded that “without clear limits on police DNA collection, the possibility for misuse is great.”

“States–including China–must enact and enforce strict limits on police collection, analysis, and storage of DNA and other sensitive biometric data, in order to minimize the potential harm to those from whom data were collected, their kin, and their wider community,” it said.

“At the international level, states, civil society groups, researchers, and international organizations should work together to establish global norms on the proper handling of biometric data.”

Jocelyn Neo contributed to this report.