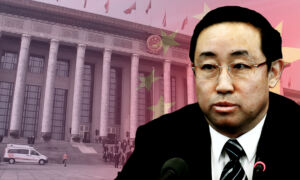 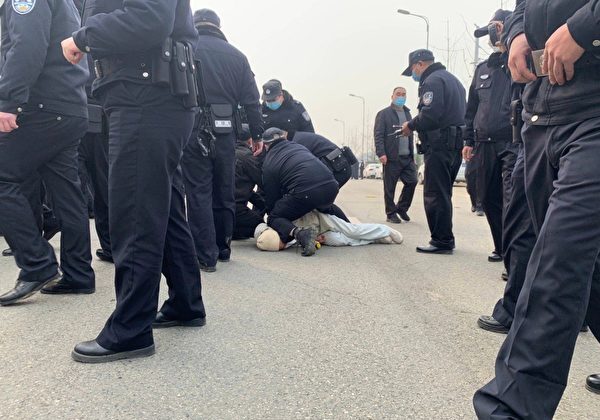 A female protester experiences overuse of force, with her neck pressured by the leg and knee of a policeman. Provided by an insider to The Epoch Times.
China Human Rights

Protesters told the Chinese-language Epoch Times that the facility was being built about 200 meters away from the residential compound of Yixin Lake.

Dissatisfied residents launched a demonstration on Jan. 23, shouting their demands.

Soon, a large number of police officers arrived at the scene and began to beat, kick, and drag away the protesters fiercely.

Photos taken from the scene show demonstrators were beaten and thrown down onto the ground. One of them was a woman pinned down by three male police officers. One of them placed his knee on her neck.

A pregnant woman was also beaten by the police. A photo shows her collapsed onto the ground, with a painful expression on her face and her right hand grasping the lower part of her abdomen.

A female director of the local water authority surnamed Luo later showed up at the site of protest. She claimed that the treatment plant was a one-year temporary project and would be demolished afterward. She added that temporary construction did not require official approval.

But residents were skeptical.

One of the residents questioned: “She also once said the project has a budget of 80 million yuan [about $12.3 million]. So, do you believe she is serious that an 80-million-yuan-project will be removed after just one year in operation?”

At one point, the protest became one of the most-searched topics on Chinese social media Weibo. But soon, comments and likes were deleted off the platform. Local media outlets did not report on the incident.

Residents told the Chinese Epoch Times that they filed their complaints to the city mayor, but to no avail.

A resident surnamed Chen (alias) told the Chinese Epoch Times that the facility is still being built and is scheduled to start operating in February.

Chen expressed that nearby residents protested its construction because it is located so close to the neighborhood, and authorities have not released an environmental assessment report. Given that there are several kindergartens nearby, Chen said, residents are worried that the waste byproducts could be toxic and undermine the health of community residents.

They believe that it was an illegal project because there was also no land use permit, planning permit, or construction permit available to the public.

Residents reported this project to the district administrative enforcement authorities. They replied that any issues with the sewage plant should be under the jurisdiction of the water authority.

Residents also accused local authorities of changing the intended nature of land use by substituting the original plan for building a sports park with a sewage facility. The new project never appeared in the local government planning, nor was it mentioned by the developer, residents said.

On Jan. 19, the water authority issued a notice, claiming that the emergency sewage plant was a temporary structure that would be dismantled at the latest by February 2022.

But community residents did not trust the statement.

They cited an example of a similar sewage plant located across the residential compound of Tianfu Peninsula, which has remained there after three years of operations, though local authorities also initially claimed it would only be a temporary facility.

Li Xin’an and Annie Wu contributed to this report.