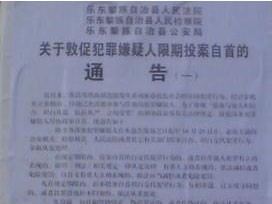 Caption: Yinggehai authorities demanded on Oct. 23 that the villagers who instigated the protests against the proposed coal plant turn themselves in before Oct. 26. (Sound of Hope)
China

Officials sent at least 3,000 riot police to stop a mass protest in southern China recently, after villagers took to the streets to try to block a power plant that they said would destroy fishing off the coast.

According to Sound of Hope Radio (SOH), a U.S.-based Chinese-language radio station, police took control of the village of Yinggehai in Hainan Province on Oct. 21. Villagers there depend on fishing to make a living.

More than one hundred were injured when the police clamped down on the protests, and a 13-year-old boy was beaten and could not be found, a resident told SOH. People fear that the boy may have been beaten to death, according to the resident.

Despite days of protests and violent suppression, local officials said they plan a ribbon cutting ceremony for the controversial coal plant between Oct. 26 and Oct. 28.

On Oct. 23 village authorities demanded that the villagers who instigated the protest turn themselves in.

Many residents told SOH that they fear being detained, and have left home to avoid being arrested. Now few dare speak of the protests.

Townspeople told SOH they feel hopeless. Police have been searching door to door for protesters, and have taken people away every day. Most people on the police wanted list turned themselves in to police by Oct. 24. At least 200 people were arrested and are to “receive punishment in accordance with their crimes.”

Of the town’s 18,000 residents, nearly 10,000 are fishermen. A villager told SOH that if the coal plant builds docks for shipping coal, it will destroy their ability to earn a living. They have never done any farm work and most of them have never attended school.

A resident told SOH that officials warned people to cooperate with the government, or their fishing boats would be destroyed. They would have “nowhere to cry,” and wouldn’t get any compensation, according to the threat, relayed through villagers.

The proposed coal plant is a project of China Guodian Corporation, one of China’s largest state-owned power companies, with nuclear, hydropower, and wind generation divisions. The corporation has a history of environmental and other problems.