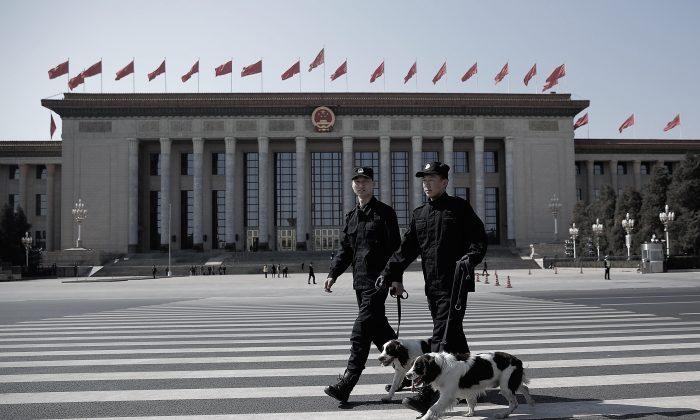 Two policeman leads police dogs guarding in front of the Great Hall of the People before the closing ceremony of the Chinese People's Political Consultative Conference on Mar. 13, 2015 in Beijing, China. (Lintao Zhang/Getty Images)
China

The campaign to pressure Chinese authorities to indict Jiang, for launching the persecution of the Falun Gong spiritual practice, has been building in momentum since May; most of the individuals lodging the complaints in China—which now reach past 80,000—are practitioners of Falun Gong.

In a number of cases, Chinese authorities took no action against those making the complaints. But in the recent case in Harbin, that changed. Whether there is a different national policy, or merely local officials unsure how to deal with the complaints, is unclear.

Between the afternoon of July 11 and early morning July 13, at least 44 Falun Gong practitioners were arrested and detained by local police in the city of Harbin in northeast China, according to the World Organization to Investigate the Persecution of Falun Gong (WOIPFG), an organization whose intended mission is in its name, on July 15. The Harbin police said that the arrests were made to “assist the investigation” of the criminal complaints filed against Jiang.

The names of the detained Harbin residents, who come from 20 different counties, townships and areas in the Shuangcheng district, are known, and were listed by WOIPFG.

Since end May, tens of thousands of Falun Gong practitioners have filed to China’s highest prosecuting body and supreme court legal complaints asking for Jiang Zemin to be brought to justice for committing crimes against humanity and genocide. Owing to a legal reform in early May, the Supreme People’s Court and the Supreme People’s Procuratorate has mostly acknowledged receipt of these complaints.

Prior to the May change in law, legal organs could reject or ignore complaints for any reason.

Minghui, an overseas website that documents the persecution of Falun Gong, says 84,835 complaints from 103,605 practitioners have been recorded as of July 23. Over 1,000 complaints come from formerly persecuted mainland Chinese, who are now abroad.

Falun Gong practitioners are specifically singling out Jiang Zemin because the persecution was carried out on his orders in July 1999. The regime’s security apparatus and Gestapo-like “610 Office” were responsible for over 3,800 persecution deaths and the incarceration of hundreds of thousands of practitioners. Researchers have also amassed evidence that military and private hospitals in China are harvesting the organs of Falun Gong practitioners to sell for a profit.

The flood of criminal complaints against Jiang comes in a rapidly changing political environment in China. Under the guise of an anti-corruption campaign, incumbent Party leader Xi Jinping has been dismantling Jiang’s political network over the past two years. Starting with Chongqing boss Bo Xilai in 2012, a host of Jiang’s protégés—the formerly powerful security czar Zhou Yongkang, the late Chinese military number two Xu Caihou, and aide to former leader Ling Jihua—have all been purged for corruption.