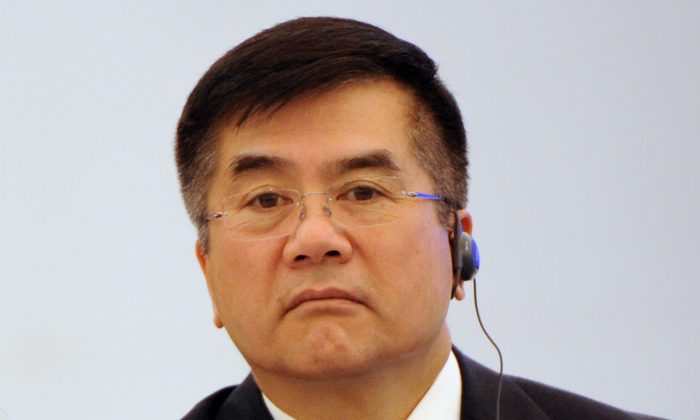 The U.S. Ambassador to China Gary Locke during the U.S.-China People-to-People Exchange at the National Museum in Beijing on May 4, 2012. After Locke announced on Nov. 20 that he was resigning his post, effective early in 2014, some Chinese netizens wondered if he is doing so because he has irritated the Chinese regime. (Mark Ralston/AFP/GettyImages)
China

From the moment Gary Locke purchased his own coffee at a Starbucks in Seattle airport while waiting to fly with his family to Beijing for his new posting as U.S. ambassador to China, he formed a bond with the Chinese people—and annoyed Chinese officials. After Locke announced on Nov. 20 that he was resigning his post, effective early in 2014, some Chinese netizens wondered if he is doing so because he has irritated the Chinese regime.

In an interview with the Los Angeles Times, Locke said he is resigning for the sake of his family, so that his two children can attend high school back in the United States.

Locke’s humble, self-effacing style does not seem to be that of a troublemaker, but controversy has followed him since he took the job.

The pictures of him at the Seattle airport Starbucks waiting in line while carrying his own backpack went viral on the Chinese Internet.

They compared him favorably with China’s notoriously corrupt and luxurious officials, who never carry their own bags or wait in line. Locke, the first Chinese-American to hold the ambassadorship, seemed close to the lives of ordinary Chinese.

Just one month after he arrived in Beijing, the Party mouthpiece Global Times sniffed that Locke was a “political celebrity” “putting on a show of being honest.”

Other incidents cemented the image of Locke as humble. For instance, in April 2012, Locke refused to stay in a five star hotel assigned by Boao Forum for Asia, a meeting he was attending in southern China’s Hainan Province, because the hotel expense was three times what the U.S. government permits.

In several articles China’s official media continued a steady drumbeat of complaint about the frugal ambassador acting a part before the Chinese public in order to “stir up trouble” in society and interfere in China’s affairs.

What rubbed Chinese officials the wrong way, though, most endeared Locke to the Chinese people.

“Locke surprised a lot of Chinese with his modesty and low-key manner. It made many people reflect on themselves, which is the best gift he brought to the Chinese,” wrote netizen Xuylie Yinji.

Locke encouraged the Chinese people to believe his emphasis was on their welfare with a simple step: He began publicizing the PM 2.5 rating.

PM 2.5 is a measure of the number of fine particles in the air. The higher the PM 2.5, the more hazy—and more dangerous—the smog.

The U.S. Embassy had made a practice of measuring PM 2.5 daily. When Locke began publishing the U.S Embassy’s results, the Chinese people could see they differed from those of the China Environmental Protection Bureau. The air pollution in Beijing was much worse than officials had admitted.

On Feb. 6, 2012, Wang Lijun, the former police chief of Chongqing and right-hand man of then-aspiring Party leader Bo Xilai, asked to be let into the U.S Consulate in Chengdu. Officials there debriefed Wang for over 24 hours, to the chagrin of Chinese officials, before Wang was sent back out.

When blind dissident Chen Guangcheng escaped from abusive house arrest in his hometown of Linyi in Shandong Province in April 2012, he fled to Beijing and the U.S. Embassy, where Locke gave him sanctuary. Locke helped negotiate hospital care for Chen and safe passage for him and family to a new life in the United States.

Beijing Daily blamed Locke for being “bold and reckless” for letting Chen into the embassy, and called it “damaging China’s social stability.”

In his resignation statement, Locke took pride in his efforts to champion American principles to the Chinese people: “And we have advanced American values by meeting with religious leaders and human rights lawyers, and visiting Tibetan and Uighur ethnic minorities in Tibet and Xinjiang.”

Chinese blogger Feizhu Manjuan had a resigned view and a different take on Locke’s decision to leave China.

“What can Gary Locke do being an Ambassador in such a country [China]? What can he change even though he wants to? Can he accept China’s disorder and corruption? He can’t change anything.”