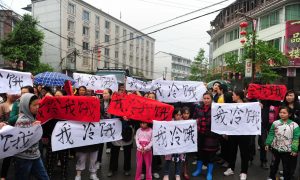 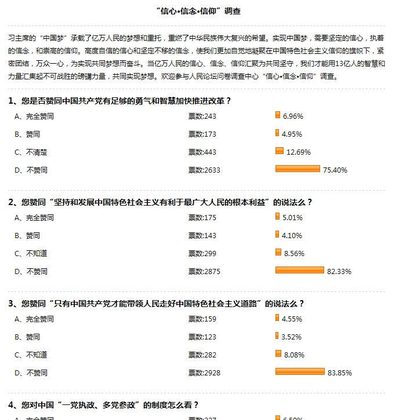 Screenshot of an online survey in China, conducted by state-run People’s Daily on April 15, 2013, showing 80 percent of respondents have no confidence in the Communist Party's leadership or reform policies. The survey was deleted within one day. (Epoch Times Archive)
China

Close to 80 percent of respondents in a state online survey said they have no confidence in the Chinese regime’s leadership or reform policies. The survey was deleted within one day.

On April 15, People’s Forum, a bulletin board service on the website of People’s Daily, published the results of what it called a “confidence, faith, and trust” survey in the Chinese Communist Party’s (CCP) ability to bring about political reforms. Of the more than 3,000 people who took the poll, 80 percent did not agree overall.

The first question asked, “Do you agree that the CCP has enough courage and wisdom to accelerate reform?” 72.1 percent said, “disagree.”

The second question was, “Do you agree with the statement ‘to uphold and develop socialism with Chinese characteristics is conducive to the fundamental interests of the overwhelming majority in China?'” This time 82.1 percent chose, “disagree.”

The third question asked, “Do you agree with the statement ‘only the CCP can lead people down the good road of socialism that is unique to the Chinese people?'” 83.53 percent chose, “disagree”.

The fourth question asked, “What is your opinion about the political system of ‘multi-party participation under the leadership of the CCP?'” 80.9 percent chose, “disagree”.

In addition to the 80 percent who disagreed overall, another 10 percent said, “don’t know”.

This no-confidence vote in the Party leadership must have come as a surprise to authorities, showing how out-of touch top officials are regarding public opinion of their performance, despite relentless propaganda.

Wu Fan, Chief Editor of online magazine China Affairs said he was not at all surprised by the result.

Wu said the Party has a violent history. If you add up all the people killed by it over the past 60 years, in addition to those who died related unnatural deaths, the number exceeds 80 million.

“Many Chinese people have come to realize the true evil nature of the CCP,” Wu said. “So many people are clearheaded now, for they see clearly what the CCP has done.”

The fact so many survey participants have this negative view indicates that the Party’s demise is inevitable, he said.

Chen Shuqing, a member of the overseas China Democratic Party, told The Epoch Times that such online survey results would be very accurate because people’s personal safety is not likely to be threatened by online voting.

“This reflects people’s true opinions,” Chen said. “Such unexpected results must have been a total surprise to CCP officials, and in the future they won’t mess around with this kind of survey again.”

Translation by Frank Fang. Written in English by Gisela Sommer.