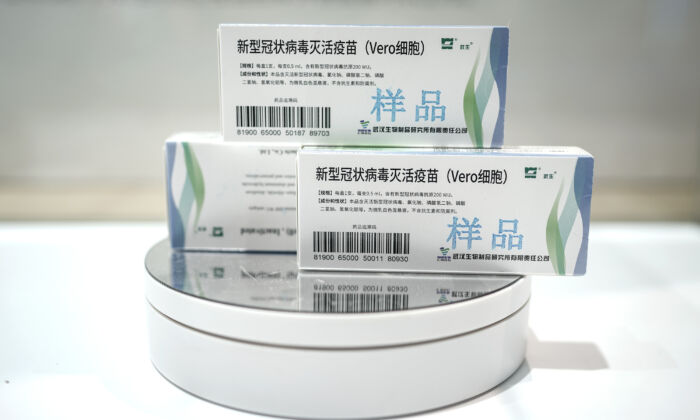 According to a July 23 report by Xinhua News Agency, the deputy director of China’s National Health Commission, Zeng Yixin, declared at a press conference that “current Party and state leaders” had all been vaccinated to protect themselves against COVID-19, and that they had received only domestic vaccines.

Zeng said this demonstrates that the CCP leaders attach great importance to the prevention and control of the epidemic and have great trust in the domestic vaccines.

Zeng’s announcement immediately triggered debates online, with people commenting that, if the leaders have been vaccinated and have a high level of trust in domestic vaccines, then when will the country open up, and when will the nucleic acid tests stop? Otherwise, where is the trust, where is the confidence, and what’s the point of having a vaccine?

Two and a half years have passed since the COVID-19 pandemic first began in Wuhan, China, in late 2019. As early as the first half of 2020, Chinese officials announced to the world that China’s domestic vaccine trials were effective.

According to state-run media People’s Daily, as of March 24, 2022, China had administered over 3.2 billion doses of COVID-19 vaccine, covering 90.47 percent of the total population, with 88 percent of the population having received full vaccination.

If more than 90 percent of China’s population has been vaccinated in the past two years, why are dozens of top CCP leaders now, belatedly, doing so? Where was their “high level trust in domestic vaccines,” as stated by deputy director Zeng?

“In normal countries, leaders are the first to take a vaccine to give the people confidence,” some people said on social media. “Why do Chinese leaders do the opposite?”

In addition to the delayed timing of CCP leaders getting vaccinated, there is actually no proof as to whether they received domestic vaccines as there isn’t any credible evidence, such as real-time news reports, photos, or videos of them being vaccinated, including close-ups of the domestic vaccine packaging, so it’s difficult to convince people.

Ordinary Chinese who were given domestic vaccines and are fully vaccinated, are wondering why they are still getting infected, put under lockdowns, and when released from lockdowns, contracting the virus again; yet none of the high-level CCP leaders were infected. It’s therefore difficult to convince the public that the leaders received only domestic vaccines.

Up Media, a Chinese website, reported that according to a transnational intelligence exchange, facing the inevitable trip to Hong Kong, Xi Jinping completed three rounds of vaccination in May—not the Chinese vaccine Sinovac, but Pfizer’s BNT, which came from abroad.

Some social media users left comments, such as: “When they [the officials] specifically announced that they got the jab, they most likely didn’t.”

“The CCP has always treated the physical condition of its leaders as a secret, so it’s odd that the leaders’ vaccination status is suddenly made public for the first time,” current affairs commentator Zhou Xiaohui told The Epoch Times.

Xinhua News also reported that Wang Fusheng, director of the Department of Infectious Diseases Medicine at the 301st General Hospital of the Army, said that receiving a COVID-19 vaccine would not cause leukemia or diabetes, nor would it affect the human genetic code, cause metastases and spreading of tumors, or cause increased antibody dependence, as some online information suggests.

The public suspects that this may be a response to the many injury incidents and even deaths caused by China’s domestic vaccines that the officials can no longer cover up.

There have always been doubts about the side effects of COVID-19 vaccines among the Chinese public. From time to time, social media and even official media release videos of people suddenly falling to the ground.

Chinese Vaccines In Other Countries

Other than using communist party leaders to endorse and reduce responsibility for the efficacy of domestic vaccines, the CCP has also called on other world leaders to stand up for it.

However, there has been a lot of negative news about world leaders who received Chinese made COVID-19 vaccines.

Peru’s Congress impeached and removed former President Martin Alberto Vizcarra Cornejo from office in November 2020 over a scandal in which he secretly received a Sinopharm vaccine in October 2020. Just six months after receiving the Chinese vaccine, Vizcarra tested positive for COVID-19 on April 25, 2021.

On Jan. 13, 2022, China Central TV reported that on Jan. 12, former Vizcarra posted on social media that he had again tested positive for COVID-19 after a rapid antigen test.

Jordanian Prime Minister Bisher Al Khasawneh was confirmed positive for COVID-19 during a visit to Egypt on Feb. 21, 2022 and had to cancel his meeting with Egyptian President Abdel Fattah al-Sisi. Jordan’s Health Minister said on Jan. 10 that Prime Minister Bisher and several ministers had received China’s Sinopharm vaccine.

Brazilian media reported in February 2021 that Brazil’s President Jair Bolsonaro confirmed on Feb. 18, 2021 that his 93-year-old mother had received a British vaccine, however medical staff forged her vaccination card; they tore up the original card and replaced it with one saying she received Sinovac. The incident sparked a lot of controversy in Brazil.

Chile’s President Sebastián Piñera personally went to the airport on Jan. 28, 2021 to welcome the arrival of a shipment of Sinovac vaccine from China and to announce that the vaccination program in Chile would begin in February.

However, by April 13, the Chilean Ministry of Health confirmed that the country’s ICUs were in “critical condition” and 97 percent of the beds were occupied by severely ill COVID-19 patients.

Chile has the third highest COVID-19 vaccination rate in the world. However, as of April, a COVID outbreak infected more than one million people and killed nearly 25,000 in Chile, Latin America’s richest country of fewer than 19 million people. In Chile, 93 percent of COVID vaccines administered were Sinovac.

What’s interesting is the absence of North Korea from the list. North Korean leader Kim Jong Un rejected 2 million doses of Chinese made AstraZeneca vaccines in July 2021. The Kim administration put it politely: “The vaccines should be sent to countries where the pandemic is more severe.”