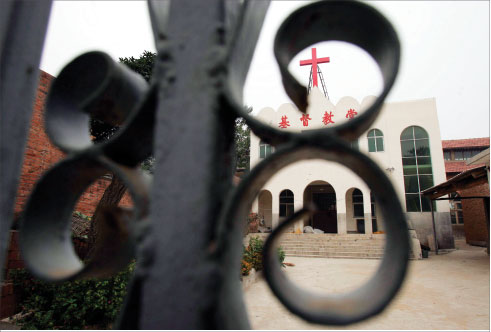 In this file photo, a Christian Church in Henan Province's Yanshi City, is pictured. In Nanle County in Hunan Province a pastor and 20 church members were detained on Nov. 16-17, according to ChinaAid. (China Photos/Getty Images)
China

The pastor of a state-sanctioned church in Hunan Province, China, was detained by officials on Nov. 16, along with church members.

Pastor Zhang Xiaojie was apparently tricked by Nanle County Public Security Chief into meeting at the church, when about a dozen police officers then entered the building and detained Zhang, reported ChinaAid, a Washington D. C. based church advocacy organization.

Church members said that the local officials “tied up” Zhang, but did not show any arrest documents. The officials took Zhang to an undisclosed location, but family members have received no notification of a formal arrest.

When Zhang’s family and church members went to the police department to protest his detainment, police held Zhang’s two sisters and denied the church members entry into the station.

Members told China Aid that officials warned them not to attend church activities or petition higher authorities about the detainments and, additionally, called church members to a government building that night, where the officials “lectured them, threatened them and instilled fear in them.”

Sunday morning at least 20 church members were detained as they came to attend church, and police stationed at the church gates beat some members, according to China Aid.

Zhang’s daughter and son-in-law took their child and fled town. She told China Aid that she had been receiving phone calls since Sunday, threatening to “wipe out her entire family” if she continued to contact overseas news outlets about the incident.

The pastor’s son-in-law says “the church respects the authority of the Chinese government.” The church, however, has been involved in a dispute with local authorities over a land matter.

Zhang is the president of the Three-Self Patriotic Movement Christian Church in Nanle County, a Communist Party-registered church. The church’s funds have been frozen since he was detained.

Church members told China Aid that officials have published bogus comments attributed to Zhang on the Internet, to calm the public.