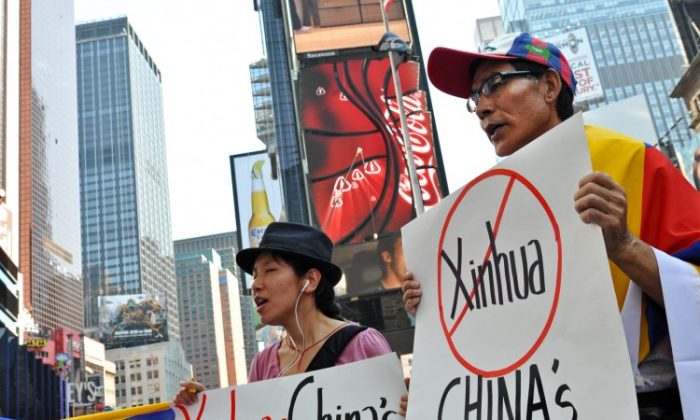 Students for a Free Tibet protest below a new electronic billboard leased by Xinhua (2nd from top), the Chinese regime's propaganda agency, in 2011 in New York's Times Square. Recently a proofreader with the regime's Central Propaganda Department published a list of propaganda and censorship guidelines online. (Stan Honda/AFP/Getty Images)
China

Chinese communist propagandists like working in secret, cloaking their decisions to block, delete, censor, and redact in an air of official mystery. That act just got harder, however, after a proofreader with the Central Propaganda Department published a list of propaganda and censorship guidelines online, and provided a personal narrative of what it’s like to enforce media control.

The information appeared on Zeng Li’s blog on Jan. 6, during the controversy over the censorship of Southern Weekly, a liberal newspaper in Guangdong Province whose journalists went on strike after Tuo Zhen, Guangdong’s propaganda chief, changed the content of the paper’s New Year edition.

Zeng Li, the proofreader at the Propaganda Department, explained how Tuo Zhen applied stricter control over the news after he took office. The news about Zeng’s notes was first reported in the Hong Kong-based Apple Daily.

Zeng Li wrote that he belongs to a team meant to “ensure that the newspaper heads in the correct direction with its function of shaping public opinion.”

“To make sure that the newspaper can be published smoothly without mistakes, the Southern Media Group has an internal review group for quality control. I am a member of the review group. I review Southern Weekly and help the chief editor guard the quality of the weekly newspaper.

“In the past two years, the government has demanded stricter control of the news, and so must we. Every issue had articles that needed to be withdrawn. Sometimes there were two and sometimes as many as eight. Normally there were about a dozen articles that needed major revisions. Many articles never got to see the light. Reporters felt suppressed and wronged, but basically they could tolerate the situation.

“Since the new minister assumed office in May 2012, the control of Southern Weekly and Southern Metropolis Daily became unprecedentedly strict. There were so many bans. The ministry even told Southern Weekly to clear the topics selected for each issue ahead of time. Reporters were not allowed to interview anyone or write anything until it approved the topic. Important reports and editorials were published only after the ministry reviewed them.”

1. Do not interview, report on, or comment on news involving Bo Xilai, former secretary of the Chongqing City Commission, and Wang Lijun, former deputy mayor of Chongqing.

2. Many brands of liquors are suspected to contain plasticizer. Use the press release from Xinhua and downplay this news.

3. In Guangshan County, Henan Province, 22 students were injured in a stabbing incident. Use the press release from Xinhua, but don’t put it on the front page.

4. Some buildings in Foshan City used sea sand as a component of the building materials. Do not interview anyone or comment on this news. [It is illegal to use sea sand that is not desalinated as construction material. The sea salt corrodes the reinforcing steel and destabilizes a building.]

5. There are pictures circulating on the Internet about Xi Jinping visiting Guangdong Province and staying in a hotel. Do not use them.

6. Do not reprint or report on the affair of the director of the Central Compilation and Translation Bureau.

7. Only do short reports on the corruption case of Qu Jianguo, former director of the Zhuhai Branch of China Guangfa Bank.