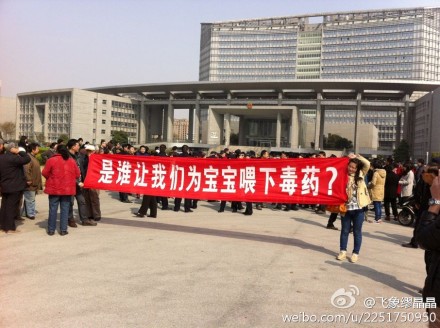 On April 1, parents held banners and rallied at Nantong's city hall to protest the regime's lack of response to a new baby milk scandal. They were later dispersed by the police. (Weibo.com)
China

West China Metropolis Daily recently reported that a milk distributor in Suzhou is suspected of mixing expired formula from an unknown source with imported Nutradefense formula, made by Swiss dairy company Hero Group. The mixture was reportedly repackaged and sold as Nutradefense formula to unsuspecting parents, who now fear it has harmed their children.

Since China’s 2008 melamine milk powder tragedy, in which six babies died and many thousands were poisoned, Chinese consumers’ trust in domestic infant formula has never been restored. Parents who can afford to buy only foreign brands, and are often willing to pay more than double the price of Chinese brands, believing them to be safer for their children.

At the demonstration, the parents held banners that read: “Who fed our babies poison?” and “Unscrupulous merchants should pay for our babies’ health.” The crowd asked for an explanation, but were aggressively dispersed by a large number of police officers.

“The incident was exposed several days ago, and the government promised to respond in three days, but five days have passed and we heard nothing,” Nantong resident Ms. Lu told The Epoch Times:

Netizens reacted angrily to the latest scandal and the regime’s handling of it.

“Don’t these people have children too?” said one Internet user.

Another posted: “My son is 6 months old and has been drinking this phony product since birth. My wife and I have fertility problems. It took us nine years and hundreds of thousands of yuan to finally have our baby. We want to give him the best, but despite careful selection, we picked the fake product!”

Some larger foreign manufacturers of infant formula, like Nutrillon, have opened official online shops in China to prevent counterfeiting. Other foreign brands are sold by vendors through Taobao Marketplace, a Chinese language website for online shopping, akin to eBay.