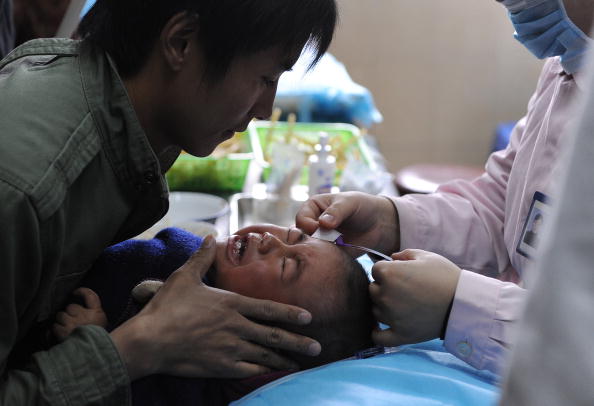 A Chinese man holds his son as a nurse administers an injection at a hospital in Hefei, a city in central China's Anhui Province on April 7, 2010. (STR/AFP/Getty Images)
Chinese Regime

Recently, a letter signed by 40 parents seeking legal redress for their sick children was sent to China’s highest court.

The letter, addressed to the supervisory bureau of the Supreme People’s Court and to the supervisory committee of Huiyang District Court in Huizhou City in southern China’s Guangdong Province, sought punishment against judges who sentenced a number of local parents and family members of children who fell ill after getting vaccinations. They were arrested for petitioning the Chinese authorities to seek assistance in caring for their children, according to a July 5 report by Radio Free Asia (RFA).

Wang Zhen’e, speaking with RFA, said one of the signers of the letter was her sister-in-law, Zhang Da’e, who is in her 60s.

On July 8, 2015, Zhang’s grandson, Wang Nuoyi, who was only 6 months old at the time, received three vaccination shots—one for hepatitis B, one for polio, and a Tdap combination vaccine (tetanus, diphtheria, and pertussis)—at the government center for disease control (CDC) in Xiangcheng County of central China’s Henan Province. Wang Longfei is the father of Wang Nuoyi.

Later that evening, Wang’s father noticed that his son began to cry nonstep. After a week, the child began to show symptoms of intellectual disabilities, according to Zhang.

The young Wang has since been taken to hospitals for treatment in Xiangcheng County of Henan; Zhengzhou, the capital of Henan; and Beijing. Doctors diagnosed him as suffering from infantile epilepsy, cytomegalovirus (CMV) infection, growth retardation, and brain injury, according to a 2017 report by RFA.

The CDC in Xiangcheng County gave young Wang a totally different diagnosis. It said he was suffering from an adverse event following immunization (AEFI), whereby the patient has a dormant illness that is triggered by the vaccine. The CDC denied that the vaccines themselves were faulty.

Wang’s family members refused to accept the CDC’s diagnosis. Since then, the family has tried to petition the authorities in Henan and Beijing to no avail.

In one incident, some of Wang’s family members were placed under administrative detention after having multiple arguments with Xiangcheng County CDC officials, according to RFA.

On Sept. 9, 2017, Xiangcheng County police arrested Zhang and Wang Longfei, Wang’s father, on charges of causing a “social disturbance.” In August, Wang Longfei had put up protest signs outside of the Henan provincial government building, in an attempt to get the attention of the provincial governor, Chen Run-er, according to Weiquan Net, a Chinese human rights blog.

In June 2018, Zhang was given a two-year sentence by a Xiangcheng County court. Wang’s status is unknown after he was released on bail in December 2017 pending a trial.

Mr. Liu, another parent from southern China’s Fujian Province whose child became sick after immunization, explained Zhang and her grandson’s situation in an interview with New York-based broadcaster NTD.

“The local government in [Henan] gave Zhang some money. But the money was not enough for covering half a month’s worth of medical expenses for [the young Wang] for treatment in Beijing,” said Liu.

Liu added, “The law is supposed to protect the citizens. But now, not only does the law fail to protect people, the law has become a weapon for authorities to oppress citizens.”

Several vaccine scandals have erupted in China over the years. In February 2016, a pharmacist surnamed Sun was arrested for running a vast underground operation that circulated out-of-date vaccinations.

In November 2017, China’s Food and Drug Administration issued an announcement that about 650,000 substandard DPT (diphtheria, pertussis, and tetanus) vaccines were found at disease control centers in two provinces and one municipality.

Wang Hailan, a resident in Yuncheng County in eastern China’s Shandong Province, saw his only son become disabled after getting a flu vaccine in October 2010, according to RFA. Since then, Wang said she has spent over 170,000 yuan (about $25,690) in medical bills for treating her son. But she continues to face harassment from Chinese authorities because of her persistent petitioning.

“I was detained four times. And once I was given a sentence of one year and eight months,” said Wang. She was sentenced in early 2015, after police charged her with causing a disturbance when she took her son to Beijing for medical treatment.