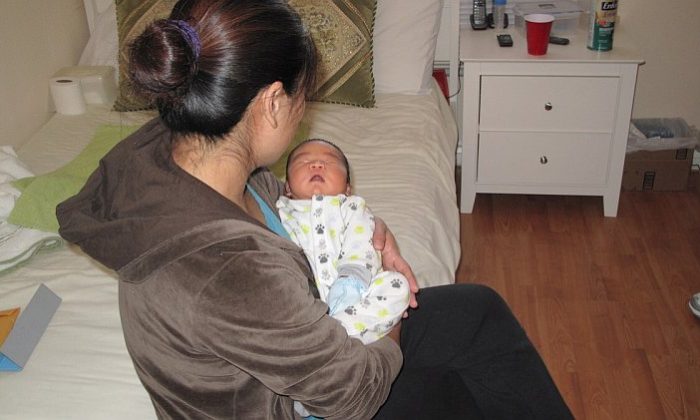 Mrs. Liu fled from China to escape a forced abortion. She gave birth to her baby in Los Angeles on Dec. 2, 2011. (Jenny Liu/The Epoch Times)
China

LOS ANGELES—Three Chinese parents share their ordeals of fleeing from China to escape forced abortion and other reprisals because of an “illegal, out-of-plan” second pregnancy.

China has in place a 30-year one-child family regulation. All “out-of-plan” pregnancies–a second pregnancy, a pregnancy by a single woman, or by an under-aged couple, for example–are aborted, by force, if a woman does not voluntarily submit to it, unless she can pay a hefty fee.

According to Zhai Zhenwu, director of Renmin University’s School of Sociology and Population in Beijing, of the 16 million babies born in China each year less than one percent is “out-of-plan.”

Some Chinese parents who want a second child are opting to go to other countries, including the U.S., to give birth. But escaping Chinese family planning authorities is no easy feat.

Officials’ Careers on the Line

Mrs. Liu, from Shandong Province, came to Los Angeles in September of last year to give birth to a second child that she would have been forced to abort in China.

Mrs. Liu is 36 years old and already has one son. Both she and her husband are government employees. Having more than one child would mean paying fines and losing their jobs. In 2004 Mrs. Liu had an abortion for an unexpected pregnancy. Last spring she became pregnant again, but this time she decided to keep the baby.

To prevent her colleagues from finding out and reporting her, she initially planned to hide at her parents’ home, saying she was attending an offsite study program. Nevertheless, somebody at her workplace, a university, still reported her pregnancy to her superiors.

“Nowadays the family planning policy in China is tied to [public] officials’ performance. A local government supervisor can forget about being promoted if something goes wrong in the execution of the family planning policy in his jurisdiction. My pregnancy became a tool for power struggle among some officials, that’s why someone reported my case to higher officials,” Mrs. Liu told The Epoch Times.

As six to seven officials’ careers were on the line, the school’s president, vice president, and director of Population and Family Planning tried many times to persuade Mrs. Liu to have an abortion, she said.

The day before she left China, the officials came to her mother’s home to check on her. To look thinner and not pregnant, she tied a belt around her waist before meeting with them, Mrs. Liu said.

“They asked me to sign a guarantee statement saying that I was not pregnant, and that I would take responsibility for any consequences if I were [pregnant].”

Mr. and Mrs. Liu thought that the worst thing that could happen to them was paying the fines or losing their jobs. But later they found that the water supply, electricity, and heating of their apartment were cut off. Mrs. Liu’s parking space was also taken away, and they realized that they might even lose their apartment.

In order to save the husband’s job, the couple even considered divorce as a last resort, because if their apartment were confiscated, they would not be able to afford another one, even if they spent their life savings, Mrs. Liu said.

Mrs. Liu was eventually able to leave China and come to the United States, using the opportunity of accompanying her son to study abroad. But officials didn’t stop harassing them even after she left China.

“They even planned on sending someone over to ‘settle the score’ with me, but gave it up after learning that it wouldn’t work in the United States.”

On Dec. 2, Mrs. Liu gave birth to a healthy baby in Los Angeles.

“After seeing my baby, I felt that I could give up anything,” she said.

On the Brink of Mental Collapse

Mrs. Song is from China’s northern Dalian City. She became pregnant with her second child when she was in her 40s. She too came to Los Angeles to save her baby.

“Having a baby should be a happy thing, but before I left China, I was on the brink of mental collapse,” she said.

Her coworkers didn’t notice that she was pregnant because she was always a bit chubby, she said. She then moved to a different area where people didn’t know her, so that nobody would report her to the authorities.

Nevertheless, she still had to be very careful when she went outside, she said.

“I always carried something in my hands or leaned forward while walking, in order to hide my belly.”

Mrs. Song said she was able to leave China through a work-related overseas study program.

My Children Can Grow Up Healthy

Mr. Fang used to be an executive of a large company in Shanxi Province. With a monthly salary of close to 20,000 yuan (US$3,175), his income was higher than that of an average well-to-do Chinese family. But after learning that having a second “illegal” child would result in a fine of over 530,000 yuan (US$84,168) and litigation, he decided to leave China with his whole family.

“Instead of suffering and having financial losses, we are better off coming to the United States,” Mr. Fang said.

Owning a house and a car, they lived a very comfortable life in China, Mr. Fang said, yet he often felt like a dead person.

Adjusting to their new life in America took time, especially learning a new language, he added. “But the air here is fresh, and they have a good education system. My children can grow up healthy. I am very pleased,” he said.

According to 2011 state media reports, an estimated 13 million abortions are performed in China annually; however official statistics only include hospital-performed abortions.

China has the highest female suicide rate in the world.