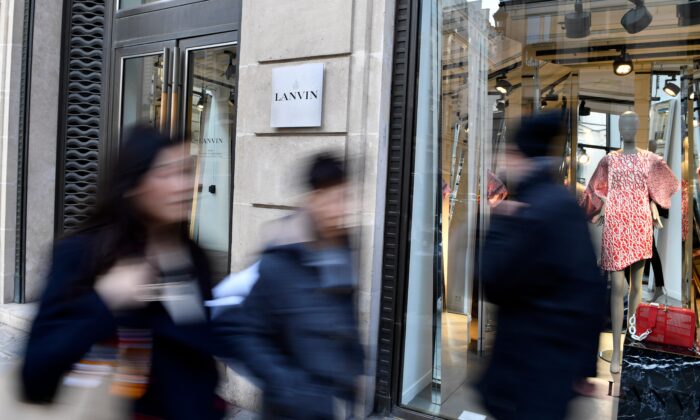 Pedestrians walk past a Lanvin shop on the Rue du Faubourg Saint-Honore in Paris on Feb. 22, 2018. Chinese conglomerate Fosun, which snapped up the French fashion label in 2018, has failed to turn the business around. (Gerard Julien/AFP via Getty Images)
China Business & Economy

The luxury goods industry has had a positive year, even amid the headwinds of worry about a possible global recession and the specter of a trade war.

The Personal luxury goods market expanded by 4 percent year-over-year during 2019, according to Bain & Co.’s recent Luxury Study. While the broader industry prospers, the handful of luxury brands with Chinese parent companies is facing greater uncertainty.

Shandong Ruyi Technology Group, a Chinese conglomerate of luxury brands, is facing a wall of bond maturities and is struggling to come up with the liquidity or a refinancing mechanism to ward off a potential default.

Ruyi currently has $345 million of U.S. dollar-denominated bonds due later this month and another 4.4 billion yuan of RMB onshore bonds due next year, according to Bloomberg data. On Dec. 12, credit rating agency Moody downgraded Ruyi’s corporate credit rating to Caa1 from B3, which occurred after S&P withdrew its rating of the company the previous week.

While Ruyi started as an obscure Chinese textile manufacturer, it, like many other Chinese conglomerates, has gone on an international shopping spree in recent years. Ruyi either owns or has major stakes in Swiss fashion house Bally, French luxury conglomerate SMCP (parent company of Sandro, Cerruti 1881, and Maje), British luxury clothing company Aquascutum, as well as High Street clothiers TM Lewin and Gieves & Hawkes.

The company took on a huge amount of debt to fund these foreign acquisitions. Debt at the end of 2018 was 28.7 billion yuan ($4.1 billion), almost double the amount on its balance sheet as of 2015 (15.4 billion yuan, or $2.2 billion). At the same time, its earnings represented as adjusted EBITDA (earnings before interest, tax, depreciation, and amortization), have risen by about 40 percent during the same period, to 2.4 billion yuan from 1.7 billion yuan, according to data from Debtwire.

A state-owned enterprise based in the company’s hometown of Jining, Shandong Province, took a 26 percent stake in Ruyi in October, in an effort to head off a potential default.

The fate of several venerable European fashion brands rests on how Ruyi plans to deal with its massive debt.

Fosun International is another Chinese conglomerate trying to revive the foreign brands it owns.

Lanvin is the biggest name brand in the group but was also suffering the most. At the time of its acquisition, Lanvin was struggling financially.

“Lanvin was suffering quite a lot. It’s kind of a turnround,” Joann Cheng, head of Fosun Fashion Group, told the Financial Times on Dec. 9, while declining to provide details about the brand’s financial results.

Fosun appears to be searching for help for the French luxury group. Earlier this year, Bloomberg reported that Fosun was looking to sell a portion of its Lanvin stake for $100 million or more.

Cheng did say that expanding Lanvin’s footprint in China, the world’s biggest luxury market, was “definitely the purpose” of Fosun’s fashion brand acquisitions. Since being acquired by Fosun, Lanvin has opened new stores in Shanghai and Hong Kong.

But Fosun has also seen its share of stumbles.

Folli Follie is one of Fosun’s first foreign acquisitions—with its initial minority stake dating back to 2011. But in 2018, hedge fund Quintessential Capital Management (QCM) claimed that Folli Follie had falsified the number of stores it had as well as other financial metrics, including sales, profits, and cash reserves. Those allegations led to a series of investigations and regulatory probes that confirmed the fraud, leading to Greek financial regulators filing criminal fraud charges against three senior Folli Follie executives in late 2018.

In another investment gone wrong, Fosun’s flagship European investment British travel group Thomas Cook Group Plc collapsed in September 2019. After months of negotiating a possible bailout, Fosun—which was the biggest shareholder in Thomas Cook—decided to cut its losses in September. Thomas Cook, a traditional travel group that managed agencies as well as its own planes, fell victim to the increasing popularity of online self-directed travel bookings.

The company’s original investment made sense at the time. Fosun was banking on continued outbound travel and tourism demand from Chinese customers, and Thomas Cook was a logical platform to pair with Fosun’s other tourism acquisition, the resorts company Club Med.

It’s difficult to generalize how these challenges arose. Sputtering Chinese economic growth, a relatively weak yuan currency, and the massive debt burden of Chinese holding companies are a large part of the issue. But so far, Chinese corporate sponsors have been able check-writers but have proven to be less-than-ideal business operators.

The most notable example of a foreign brand succeeding post-Chinese acquisition is perhaps the Swedish auto manufacturer Volvo.

After years of struggling under Ford Motor Co., Volvo was acquired in 2010 by Chinese automaker Geely. Geely capitalized Volvo with fresh funding but left its operations and strategic decision-making in the hands of existing management with little interference. Since then, Volvo has expanded its market presence across the globe, including in China.

As for Lanvin, Fosun may yet adopt a more hands-off approach.