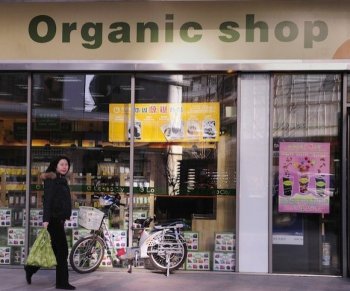 Li Ping
View profile
Follow
biggersmaller
Print
Demand for organically grown produce has been on the rise worldwide, and Chinese farmers have also been edging into this profitable market. But the European Union and the United States have pretty much closed their doors to many Chinese products labeled “organic,” as they discovered that China’s organic certification system is below standards.

Goji berries are an example. The goji berry is a small red berry that has been traditionally used in Chinese medicine to improve liver and kidney function, as well as eyesight. It’s also the main source of livelihood for many farmers in Zhongning County, in China’s northwestern Ningxia Province.

Zhongning County is the world’s largest producer of goji berries, with a total of 1.5 billion yuan (US$232 million) annually. The area is also the largest exporter, with 3,500 tons, or 60 percent, of Chinese goji berry exports to more than 30 countries and regions, including the United States and Canada, generating over US$30 million, according to a recent report on the Hong Kong-based Wenwei.com.

But this year many goji berry growers in Zhongning are having difficulties, a Southern Weekend report revealed on July 14.

“The European Union and the United States have pretty much closed their doors to Chinese goji berries,” Liu Lei, the vice president of Zaokang, the largest goji berry production firm in Zhongning County, told Southern Weekend after attending a meeting with staff from the Swiss Institute for Market Ecology.

“The inspection this year is exceptionally rigorous,” Liu said. “They inspected very thoroughly. Not only did they add more detailed requirements, but also added an online tracking system.”

The real problem with many Chinese food imports is pesticide use, even on foods that are labeled “organic.”

Between January 2007 and March 2009, 24 shipments of goji berries from mainland China were refused entry into the United States by the U.S. Food and Drug Administration (FDA) because of pesticide residues, sulfide, pigments, harmful impurities, unlabeled ingredients, and other reasons, according to data from the Ningxia Province Forestry Bureau.

“Since 2007, the FDA has stated that there are no clear standards for pesticide residue levels on goji berry in the U.S., and so it required that pesticide residues must not be detectable on any goji berries entering the U.S.,” Meng Yuejun, director of the Zhongning County goji berry production management office told Southern Weekend.

“Organic goji berries from Ningxia basically stopped being exported to the U.S. since then,” Meng added.

The EU has clearly stated that it requires the pesticide acetamiprid on fresh goji berries to be less than 0.01 mg/kg, which means pesticides can’t be used in the production process. This is a huge challenge for Zhongning’s growers: goji berries suffer badly from pests and usually require chemical treatments at least six times a year.

As for the tons of “organic” goji berries that have flooded the market and were even exported to Europe and the United States, Zhou Jiaqi, owner of another Ningxia goji berry exporting business told Southern Weekend, “Many growers simply bought the organic certificate [through illegal means].”

Wenweipo.com said the organic goji berry planting area in Zhongning County exceeded 46,000 mu (7,578 acres). However, a Southern Weekend reporter found that only 3,000 mu had actually received organic certification, an area that could only produce under 12 tons of organic goji berries, a small fraction compared with the thousands of tons of goji berries exported from Zhongning every year.

In June 2010, a New York Times article stated that the U.S. Department of Agriculture (USDA) terminated operations of the Organic Crop Improvement Association (OCIA), another organic product certification organization in China, because OCIA hired Chinese government officials to certify Chinese farms and allowed them to use the USDA organic certification labels on their products.

The grocery store chain Whole Foods, which used to sell about 30 private label items with supposedly organic ingredients from China, will stock only two (real ones) by the end of this year.