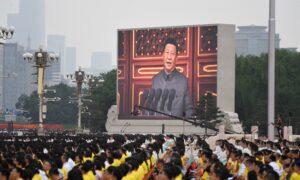 The Problem is Not Just Xi Jinping; It is Communism
0
Share Now
TelegramFacebookTweetEmailTellMeWeReddit
Copy Link 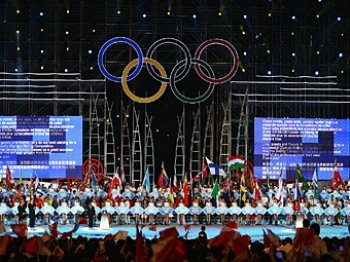 Kati Turcu
biggersmaller
Print
The world hasn’t seen the kind of paranoid pomp and ceremony currently on display at the 2008 Beijing Olympic Games since the 1936 Olympics held in Berlin when Hitler saw the opportunity to use them as a tool for propaganda.

This time around, technology has arguably made it easier to fake the semblance that all’s well in China.

It turns out that the sequence of 29 fireworks that travelled across Beijing from south to north was pre-produced footage provided to broadcasters for "convenience and theatrical effects", according to Wang Wei, Bocog's executive vice-president.

Then there’s little Lin Miaoke who did not, as it turns out, actually sing “Ode to the Motherland” at the opening ceremony. Her instant celebrity turned to notoriety at the news that her pretty face was merged with the perfect voice of Yang Peiyi, who was not allowed to appear because she is not as "flawless" as nine-year-old Lin.

The show's musical director Chen Qigang said during an interview with Beijing Radio: "The reason for this is that we must put our country's interest first.”

Harder to manufacture is the overall feeling of celebration and spontaneity, something that foreign correspondents seem hard pressed to track down.

The CCP’s tactics regarding presenting a benign and indispensable image has not changed over the decades, though the opening created by the internet has made the average Chinese more savvy in smelling a rat served up as Peking duck.

Mr Fan, a radio broadcaster in Beijing from 1970–1988 recalls U.S. president Nixon’s visit to Shanghai in the early 1970s, when American officials visited China for the very first time after the communist party take over.

“Travelling with Mr. Nixon was a group of what people called China experts,” said Mr Fan. “ In order to leave the American visitors a good impression a big campaign was organised. A friend who lived in Huangpu district where the famous Nanjing Road is located told me what happened.

Her neighbourhood committee asked her to go to Nanjing Road on such and such date and at such and such time. She was asked to dress in her best clothes and walk along a certain section of the road. So that at the time when Mr. Nixon arrived there would be a lot of very smart people walking along the Nanjing Road looking prosperous.

“The store that Nixon was about to visit also received orders and got fully prepared. They had prepared a whole new set of the price tags for everything on sale in the shop. These price tags were all marked down. The shop assistants were advised that when certain music was played they had to change all the normal price tags with the new ones.

"In this way the Americans would be impressed how cheap prices were in China. It was a very complicated campaign involving thousands of people and the coordination of many departments. However, the CCP managed it with ease.

“They [the CCP] don’t want the world to know how poor the majority of Chinese people really are.” Said Mr Fan.

An old adage comes to mind—“It all comes out in the wash.” For the majority of Chinese people though it isn’t coming out soon enough.