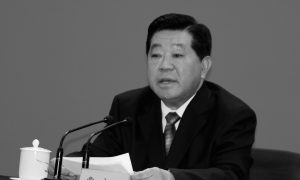 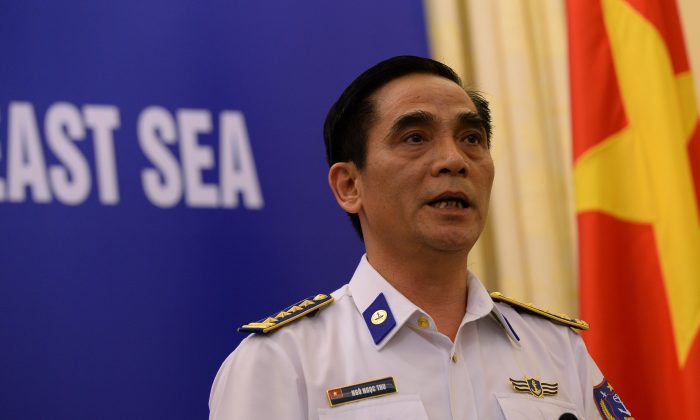 Ngoc Ngoc Thu, deputy commander of the Vietnam Coast Guard, addresses tensions between China and Vietnam during a press conference in Hanoi on June 5. On Wednesday China announced it was removing its controversial oil rig from waters between Vietnam and the Paracel Islands. (HOANG DINH NAM/AFP/Getty Images)
Asia & Pacific

On Wednesday the Chinese regime removed its oil rig on from territorial waters claimed by Vietnam. The rig is now headed to waters near China’s Hainan Island, but the tensions and diplomatic harm it created for China will not soon disappear.

Vietnamese authorities are demanding that China never deploy an oil rig again in the region. According to AP, the Vietnamese foreign minister said in a statement, “Vietnam is determined to defend its sovereignty and sovereign rights in accordance with international law.”

The official line of Chinese authorities is that the rig finished its work and typhoon season was coming, so it was removed.

The deployment of the rig in early May was made more provocative by a fleet of 80 vessels, including 7 warships that accompanied it. The rig became the focal point of a naval standoff between China and Vietnam, with Chinese ships ramming Vietnamese ships, and both countries accusing the other of hostilities.

By positioning the rig in waters claimed by Vietnam near the Paracel Islands, the Chinese regime was placing a claim on those waters—one of several recent provocative actions meant to assert a Chinese claim to disputed territory.

Just over a week later, China sent its aircraft carrier, two missile frigates, and two missile destroyers to an area of water between Hainan and the Paracel Islands. The ships then claimed an “inner defense layer” that covered 2,800 square miles and blocked off most of the channel.

China soon followed its East China Sea ADIZ with “no fishing” zones in the South China Sea. It has since used those zones as a legal pretext for harassing ships from other nations in the area.

In the wake of China’s growing aggression, an alliance has formed among China’s neighbors, and their diplomatic scales have tipped in favor of the United States.

As part of the Asia Pivot, the U.S. Navy has shifted forces to the Asia–Pacific region, while the United States has been reaffirming its commitment to countries in the region—including South Korea, Japan, the Philippines, Malaysia, and Vietnam.

Last Thursday, the U.S. Senate issued a bipartisan resolution for the Asia–Pacific region, “Reaffirming the strong support of the United States Government for freedom of navigation … and for the peaceful diplomatic resolution of outstanding territorial and maritime claims and disputes.”

It adds that the “rules of engagement” declared by China with its air defense zone “are in violation of the concept of ‘due regard for the safety of civil aviation’ … and thereby are a departure from accepted practice.”

The Chinese regime claims Spratley Islands, Paracel Islands, and Senkaku Islands and stretch deep into the South China Sea, toward the lower tip of Vietnam. Its claims also include areas within the exclusive economic zones of several other countries.

The Chinese regime claims historical ownership of the waters, and has used ancient maps as an attempt to justify its actions. Other nations, including Vietnam and the Philippines, have shown similar maps stating otherwise.

The Senate resolution states “Territorial and maritime claims must be derived from land features and otherwise comport with international law.” It adds, “Freedom of navigation and other lawful uses of sea and airspace in the Asia–Pacific region are embodied in international law, not granted by certain states to others.”