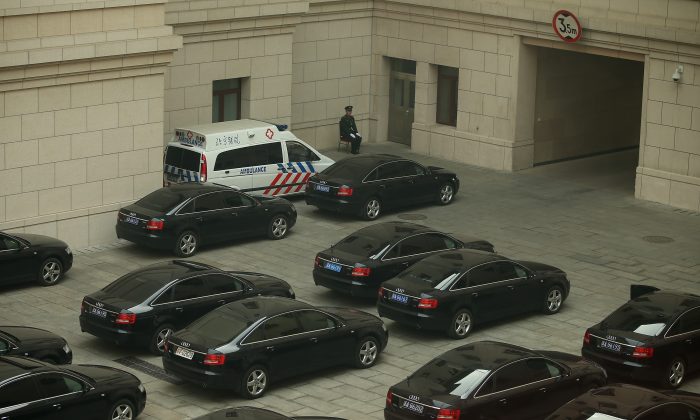 A soldier guards top leaders' cars inside the Great Hall of the People during a meeting of the National People's Congress on March 8, 2013 in Beijing, China. On July 16, China formally released a reform program for reducing officials' use of publicly provided cars. (Feng Li/Getty Images)
China

The ongoing anti-corruption campaign in China has now taken aim at another official perk: state-provided cars.

On July 16, the Chinese regime formally announced a new program aimed at cutting the use of official vehicles and seeking to reduce expenses and avoid corruption, according to reports in China’s state-run media.

According to the new rules, departmental-level and lower-level officials will not be offered official vehicles from now on, and by the end of the year at least 5000 official vehicles must be sold off. Those cars will be sold at public auctions nationwide, and the money earned will be turned over to the central treasury after taxes are paid, the announcement says.

Attention on official corruption in China has focused on what are referred to as the “three public consumptions”—overseas trips, vehicles, and official receptions. In December 2012, immediately after Xi Jinping was installed as general secretary, the Party issued 8 rules meant to curb official extravagance. Recent reforms have prescribed how many dishes could be served at official meals, and forbidden use of dining clubs.

Official vehicles currently cost over 400 billion yuan ($64.5 billion) a year in China, according to the state-run Chinese Central Television news. China has over four million official vehicles, and the number has been increasing by 20 percent every year, CCTV reported.

Chinese media have often reported official drivers typically work as the personal drivers for officials, taking their children to school and then bringing the children home, driving the family on vacations, and so on.

To take the place of official vehicles, department-level officials will receive 1300 yuan (US$210) a month as a compensation for transportation, and the next two levels lower are to receive 800 yuan (US$129) and 500 yuan (US$81) a month, the state announcement said.

The reform program has attracted much attention on China’s Internet. While some netizens support the change, which citizens have requested for years, many others are critical and doubt the effectiveness and fairness of the reforms.

“[The compensation] is obviously not fair, and shows a strong sense of privilege,” netizen Xiaopi Dage remarks, “Why can’t they be reimbursed for travel expenses? Is 500 yuan enough for a low level staff member who has a heavy workload?

“Often times it’s the lower-level staff who must go visit the higher-level officials for meetings. For department-level leaders who don’t have that many errands to run, the refund for them will be like a disguised bonus. It doesn’t solve any problem.”

A professor at China’s National School of Administration, Gu Pingan, also told the mainland magazine Southern Weekly that the compensation for transportation is questionable, and even officials at the same level have distinctly differing needs for transportation.

Public funds for official vehicles are often used to purchase luxury cars for officials. The state-run People’s Daily reported earlier this month that a group of officials took around 20 large white SUVs to the Xilingol Grassland in the Inner Mongolia Autonomous Region to film horses, because “the leaders all love filming horses.”