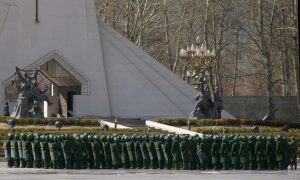 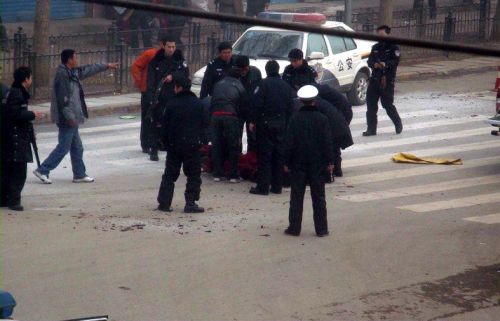 Chinese authorities have threatened to “strike hard” at families and communities of would-be self-immolators in Ngaba Prefecture of Sichuan Province, when the majority of self immolations by Tibetans have occured. This photo shows police surrounding the body of a monk who self-immolated in Ngaba in March 2009. (Internet photo)
China

A document recently smuggled out of Sichuan Province’s Ngaba Prefecture shows an edict by local officials imposing draconian measures against the communities, families, and associates of all self-immolators, punishing them for the act.

Most of the self-immolations have occurred in China’s Ngaba Tibetan and Qiang Autonomous Prefectures, east of Tibet, where the Dzorge County government has announced that it will take innocent people hostage en masse, said the Tibetan Centre for Human Rights and Democracy (TCHRD.) The edict warned that if there is a self-immolation, the government will “strike hard” against these hostages and methodically take away their human rights, and make life for the innocent survivors unbearable, TCHRD reported.

This warning is very simple, said TCHRD: “If there is a self-immolation, the local government will attack your family, village, and monastery.”

The official document, displayed and analyzed on the TCHRD web site, was dated April 8, 2013. It specifically listed 16 articles of restrictions and punishments for the family, village, and monastery of a self-immolator.

“All of these measures violate human rights that the Chinese Constitution claims to protect,” said TCHRD’s analysis of the document. But, it added, “The local authorities in Dzorge make it clear that they have placed a sword over the families of would-be self-immolators.”

Family members of self-immolators will be blacklisted, deprived of their political rights, and banned from government employment. Their home and land will be confiscated, and they will be prohibited from starting a business. They will be excluded from all welfare benefits for 3 years and barred from traveling to Lhasa or to foreign countries. Family members will be unable to find work or permanent housing and will not be permitted to borrow money, TCHRD said.

Monasteries and villages will be fined amounts from 10,000-500,000 yuan ($1,648 to $82,414) in the form of a deposit to ensure against future self-immolations. In the case of a self-immolation, the money will be forfeited, and a new deposit required. The self-immolator’s village or monastery will be prevented from receiving financial assistance in the future, effectively preventing the creation of any new business, TCHRD said. Villagers will be forbidden the use of farmland and grasslands.

These economic measures are particularly harsh in this area of Sichuan Province, where in 2011 the average annual net income in rural areas was 6,129 yuan ($1,010), according to TCHRD.

The new strictures will place all monastery financial records under the scrutiny of local officials and in effect require the monastery to rely on the government for electricity, water, and food, TCHRD said. Villagers, monks and nuns, officials, and monastery teachers will be subjected to “legal education,” or brainwashing, campaigns.

Villagers’ Committees in Dzorge County were ordered to publicize the new measures and post the document at local government offices, police stations, shops, and restaurants throughout the county, according to the Tibetan who smuggled the document out of Ngaba. The man told TCHRD that self-immolation-related detentions and arrests are common occurrences in Dzorge County. Every person who is remotely connected to a self-immolator is being detained, questioned, and tortured, he said.

Since 2009, 126 Tibetans have set themselves on fire. The immolations have been a protest against the Chinese regime’s policies in Tibet, which Tibetan groups say are leading to the cultural annihilation of the Tibetan people.