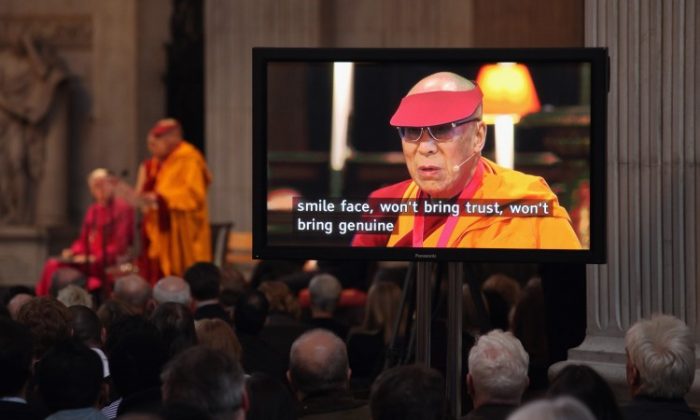 Dalai Lama at St Paul's Cathedral on May 14, 2012 in London. (Photo by Oli Scarff/Getty Images)
China

Weeks ahead of the London Summer Olympics, Chinese officials threatened to pull China’s Olympic athletes out of their training camp in Leeds due to the Dalai Lama’s planned visit to the city in Northern England, the BBC reported on June 13.

The Dalai Lama is scheduled to speak at the Yorkshire International Business Convention in Leeds this Friday. Chinese officials reportedly asked the Leeds City Council to put pressure on the organizers to cancel his visit, but the Dalai Lama is still expected to show up.

Fabian Hamilton, MP for Leeds North East and chair of the All-Party Parliamentary Group for Tibet, called the Chinese officials’ actions “distasteful,” and criticized them for telling England’s elected officials to cancel the Dalai Lama’s visit. He characterized China as “a country whose human rights record is appalling, where freedom of speech is not allowed, and where there is no real democracy.”

Liu Weimin, spokesman for the Chinese Foreign Ministry, responded to questions regarding whether the Dalai Lama’s visit to Leeds will affect China’s participation in the Olympic Games: “We hope the British side will stop making mistakes again and again, which undermine China’s interests. China-UK relations have been affected by the recent meeting between the British leader and the Dalai Lama. The responsibility lies with the British side.”

In May, Prime Minister David Cameron met with the Dalai Lama, who visited the U.K. to receive a prize for his spiritual leadership. As a result of the meeting, the BBC reported that all high-level meetings between British and Chinese officials have since been suspended.

Wu Bangguo, chairman and party secretary of the Standing Committee of the National People’s Congress, was scheduled to visit London but the visit has been suspended.

Around 220 athletes, coaches, and support staff will be staying in Leeds beginning early July, the BBC reported. The city council gained a deal worth 250,000 English pounds (US$389,000) for hosting the team.

The city council was quick to clear any associations it had with the event. Tom Riordan, chief executive of the Leeds City Council said in a statement, “The Yorkshire International Business Convention is a private event not organized by Leeds City Council. Whilst we are aware of some sensitivities around this year’s convention, as it is not a council event we do not feel it is appropriate for us to make any further comment.”

Meanwhile, Chinese netizens expressed their disapproval of the Chinese officials’ attempt to stop the Dalai Lama from visiting England. Twitter user shengzhaozhang tweeted: “I hope the International Olympic Committee in England will invite the Dalai Lama to the Olympics opening ceremony.”