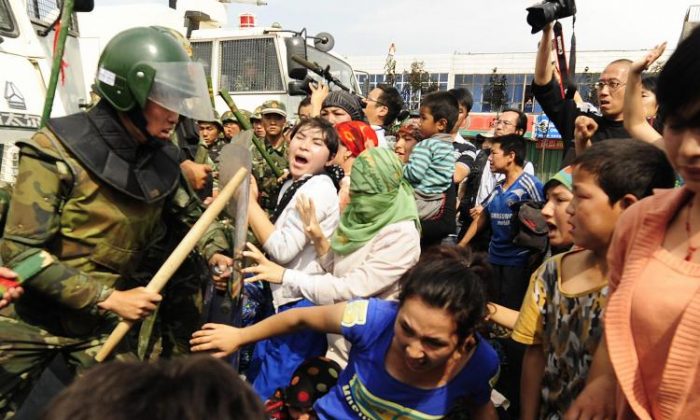 Chinese riot police ready for conflict with ethnic Uygur women, who protest in Urumqi in China's far west Xinjiang province on July 7, 2009. Recently farmers in Xinjiang have been detained for fighting to regain land they say that officials confiscated by terminating their leases. (Peter Parks/AFP/Getty Images)
China

Several farmers in Western China’s Xinjiang Province were detained last week for speaking to media about what they say was the illegal cancellation of their property leases by officials, who then allegedly stole their land.

The authorities detained and questioned the farmers on suspicion of revealing state secrets and talking to “hostile” media organizations, relatives told RFA.

“They just kept asking him, over and over, whether he had called Radio Free Asia or taken their call,” she said.

Another farmer said at least eight people had been detained, and one woman was taken by gunpoint. All were outspoken farmers who are fighting the illegal cancellation of their 30-year and 50-year property leases by local officials, according to RFA.

The farmers, a mixture of ethnic minority Kazakhs, Uyghurs and Xibe, as well as migrant Han Chinese farmers, are from several communities in northwestern Xinjiang’s Qapqal Xibe Autonomous County in Ili prefecture.

Officials “roughed up” farmers who tried to negotiate the lease cancellation, and told them to go away, they told RFA. They said they offered to pay additional fees, in light of rapidly increasing land values, but the officials wouldn’t negotiate.

The farmers and their families migrated to the area as part of a national economic development plan for the region, beginning in about 2000. They invested “millions of yuan”, in their words, to develop the barren land into productive farm land.

“We invested a lot of money,” said Chen Ying, who was interviewed by RFA earlier in the month. “Back then, it was all waste ground and desert, and we hired people to dig all the stones out of the ground…and brought trees here.”

“Now they are just taking it back with no compensation; they say we get to keep the houses we live in, but the land has gone,” she told RFA.

“As soon as we made it fertile, they looked at it with envy, and now they have taken it away,”

Earlier in the month police detained a number of Qapqal farmers who had petitioned the land grab and sentenced them to periods of up to 60 days’ administrative detention for “spoiling agricultural land.” The police put others under residential surveillance, local residents told RFA. The police took their ID cards and confiscated computers, they said.

Land grabs such as this one in Qapqal county are major problem in Xinjiang as well as in the rest of China. The confiscation of land fuels tensions in Xinjiang and Tibet. Residents accuse Han Chinese of stealing their land for development, displacing them from their homes and homelands and depriving them of their livelihoods or new employment, while keeping them under severe Beijing rule.

These land acquisitions for development too often bring highly profitable deals for local officials, while depriving the residents of their share. Thousands of protests erupt in angry local communities across China every month, sometimes escalating into clashes with police, says RFA.