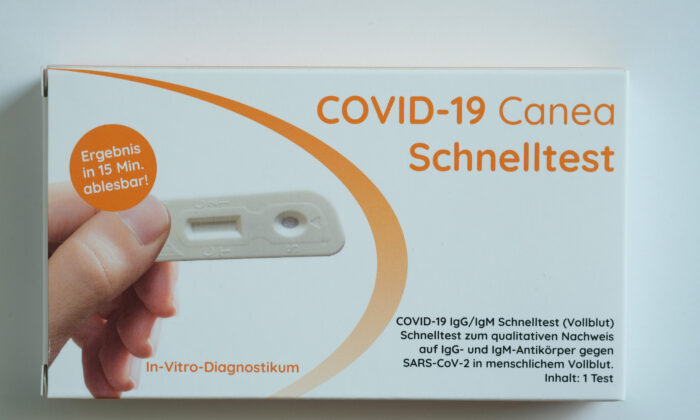 A home COVID-19 testing kit made in China is pictured in Berlin on April 17, 2020. (Sean Gallup/Getty Images)
INSIDE CHINA

Since the Omicron variant outbreak began in China, Chinese state-owned companies have been making billions of dollars selling test kits to the public. The rapid antigen detection tests approved by Chinese authorities for home use are selling at many times the cost of manufacturing.

As the competition among Chinese manufacturers has intensified, the cost of centralized test kit procurement in various regions has fallen sharply yet retail prices remain high—as much as 5 to 15 times the production cost.

According to Chinese state media reports, the retail price of a single rapid antigen test kit ranges from 16.8 to 30 yuan ($2.60 to $4.70) in various parts of the country.

Meanwhile, the production cost of a single-use kit is only between 2 and 3 yuan ($0.31 to $0.47), the 21st Century Business Herald reported on March 16, citing a research report by GF Securities. Only test kits produced specifically for “demanding markets,” such as the United States, can cost up to 4 yuan ($0.63) to produce, the report said.

Each Province Tasked With Obtaining Reagents

Chinese financial media Caixin.com quoted an expert close to China’s National Medical Insurance Bureau on March 16 as saying that the antigen detection reagents will no longer be collected nationally but by each province.

Also on March 16, the official centralized procurement of test reagents from the alliance of Shandong and Shanxi provinces bid opened. The average winning price of the five selected companies was 8.3 yuan ($1.30), of which the lowest price was 7.9 yuan ($1.20) by Huada Gene’s Huada Yinyuan, and the highest was 9 yuan ($1.40) by Boosaisi (Biology and Science).

Guangdong Province in southern China and Henan Province in central China both officially announced on March 16 that their centralized medical insurance purchases would continue to use Wanfu products, but the retail price was reduced by 42 percent, from 16.8 yuan per single use ($2.60) to 9.8 yuan ($1.50).

Billions of Dollars From the Chinese Market

The industry generally predicts that once the antigen detection reagents are implemented on a large scale in China, they will generate huge demand and become consumer-grade medical products, with a considerable market size.

According to the report by GF Securities, the current production capacity of antigen detection products in China’s entire industry is about 3-4 billion tests per month, with the actual current output being about 2 billion tests, and the annual output 24 billion tests. Based on the centralized retail price of 8 yuan ($1.30) per kit, annual sales are projected at nearly 200 billion yuan ($31.4 billion).

For example, Guangdong, Shandong, and Henan provinces are the three most populous provinces in China, with a population of over 300 million people, and are the areas with the most severe epidemic outbreaks. A single-day supply of Shandong and Shanxi centralized test kits exceeds 20 million.

Based on the lowest current retail price of 16.8 yuan ($2.60), people in Shandong and Shanxi provinces are paying 336 million yuan ($52.82 million) a day for the kits. Manufacturers generate 166 million yuan ($26.1 million) in daily sales, while another 170 million yuan ($27 million) goes into the pockets of local government officials and retailers.

A daily test kit expenditure of $2.60 per person is a hardship for the average Chinese citizen who may earn one-tenth or less the salary of an average U.S. citizen.

Zheng Jie, a current affairs commentator now living in Japan, says that China’s “Zero COVID” prevention policy is just a ploy for the rich and powerful to make money. Whether it’s nucleic acid testing or antigen testing, it’s a collusion between officials and businessmen, with the support of CCP officials behind them. Once a COVID-19 case occurs in any part of China, the local government will mandate nucleic acid testing multiple times, she told The Epoch Times.

“This is looting the people,” Zheng said.

According to a research report by Zhongtai Securities, there are currently hundreds of Chinese manufacturers of novel coronavirus antigen detection kits that have been approved for overseas registration. Once China releases the product registration approval, those top brands with relatively large overseas sales may be attracted by China’s huge domestic market. Intensifying domestic competition in China could also reduce prices.

The research report of GF Securities stated that the proportion of raw materials produced by the main manufacturers of antigen self-test reagents is relatively high. In extreme cases, the production cost can be reduced to 1.5 yuan ($0.24), and the OEM order price is 1.9-2.5 yuan ($0.30-$0.39) per item.

The report also disclosed that, at present, the approved companies’ quotations for domestic pipelines in China, Hong Kong, and the United States are 12 yuan ($1.90) per test.

However, the average price of Chinese antigen self-test reagent manufacturers exporting to Europe is only 5.5 yuan  ($0.90) per test.