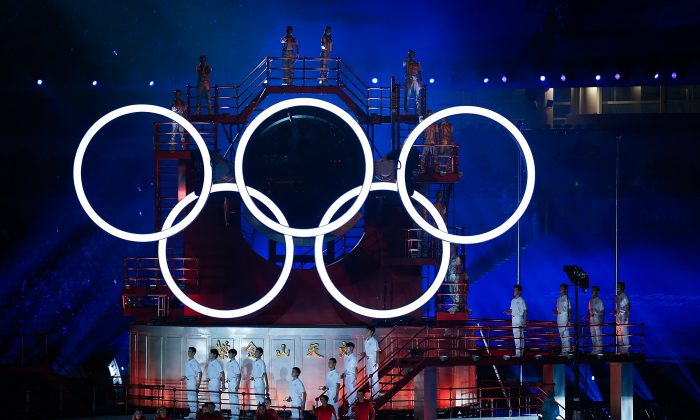 A general view of the Olympic Rings during the opening ceremony for the Nanjing 2014 Summer Youth Olympic Games on Aug. 16, in Nanjing, China. An online post about how the official who organized this event, and other officials who organized similar international events, have been fired for corruption went viral on the Chinese Internet. (Lintao Zhang/Getty Images)
China

When the World Youth Olympic Games opened in Nanjing on Aug. 16, the capital of Jiangsu Province on China’s coast, the official who had brought those games to the city was sitting in prison. So, too, were several other high-profile officials responsible for international events in China.

Chen Xitong, the former mayor of Beijing, served as the director of 2000 Olympic Games bid in 1991. In what was widely seen as a political prosecution by then-Chinese Communist Party head Jiang Zemin, Chen was investigated in 1995 for economic corruption and was sentenced to prison in 1998 for 16 years for corruption and dereliction of duty.

During the 2008 Beijing Olympic Games, Chen was given permission to watch the Olympic Games during medical parole. Chen passed away in prison due to illness in June 2013.

The other three officials mentioned by the blogger Xu have close ties with Jiang Zemin. Since the announcement on July 30 that his confidant Zhou Yongkang, former czar of the security system, was being investigated, Jiang is believed to be the next target of the anti-corruption campaign.

Ji Jianye, the former mayor and Party head of Nanjing City, was dismissed last October and put under detention by Chinese New Year’s, suspected of economic corruption. The Chinese media reported Ji was involved in sex scandals, including promoting female subordinates in exchange for sex.

Ji served as mayor of Yangzhou City of Jiangsu for eight years, and has close ties with former leader Jiang Zemin whose hometown is Yangzhou, which borders Nanjing.

Chen Liangyu, who brought the World Expo to China, Jiang’s subordinate as a district mayor in Shanghai when Jiang Zemin was the Party chief in Shanghai. Chen was promoted with Jiang’s help, and eventually became a Politburo member. Chen was investigated in 2006, and sentenced to a 19-year prison term in 2008 for taking bribes and abuse of power.

Xu Zongheng has close ties with the former Party chief of Shenzhen City, Huang Liman, who was Jiang’s secretary and mistress in 1980s’, according to inside sources. Xu climbed high in officialdom under the protection of Huang and Jiang.

Xu Zongheng was arrested in 2009, and in 2011 was sentenced to death, with the sentence immediately suspended, for buying official positions and taking over 2 billion yuan ($325 million) in bribes. Chinese media reported Xu had dozens of mistresses.

Many netizens responded to Xu Shaolin’s post about the four officials now in prison with the view that official corruption in China has become so widespread that it’s hard to find a good official.