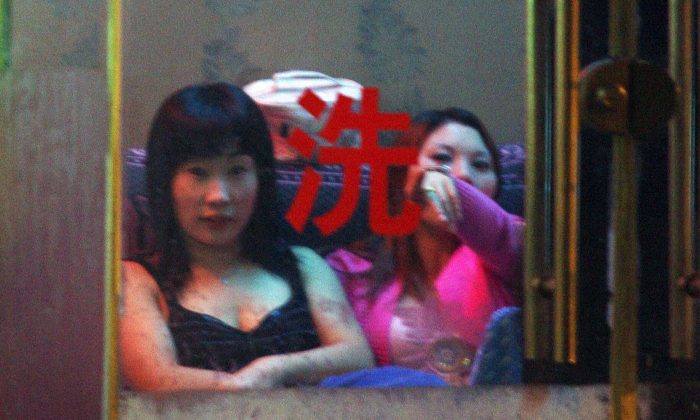 Chinese prostitutes wait for customers at a neighborhood brothel in Shanghai, 29 November 2006. Officials in the Chinese Communist Party and government were involved in over 700,000 extramarital affairs in 2014, according to a report by the Hong Kong magazine Chengming. (Mark Ralston/AFP/Getty Images)
China

Officials in the Chinese Communist Party and government were involved in over 700,000 extramarital affairs in 2014, according to the regime’s internal statistics, Hong Kong’s Chengming Magazine reported in its February edition.

Over 70 percent of the cases involved officials at the division level or higher, and nearly 22,000 cases were filed at local courts.

In contemporary China, it’s no secret that communist officials usually enjoy “side dishes.” As reported by the Chinese media Legal Daily in January 2013, a study conducted by the Crisis Management Research Center at Renmin University in Beijing showed that 95 percent of officials investigated for corruption kept mistresses.

A 2008 report cited by the Chinese media Southern Weekly last March described how “some government compounds are like communes of widows, with almost no men remaining at home.”

“All of our media are full of lies and contain hardly a single line of truth. They boast and flatter the party. About 96 percent of our officials are corrupt and have mistresses…” Hu wrote.

Last month, the Communist Party requested communist officials to fill out a new form about their personal information. Included is a query about marital information. The instructions stressed that officials must accurately report their divorce history or be barred from promotion.