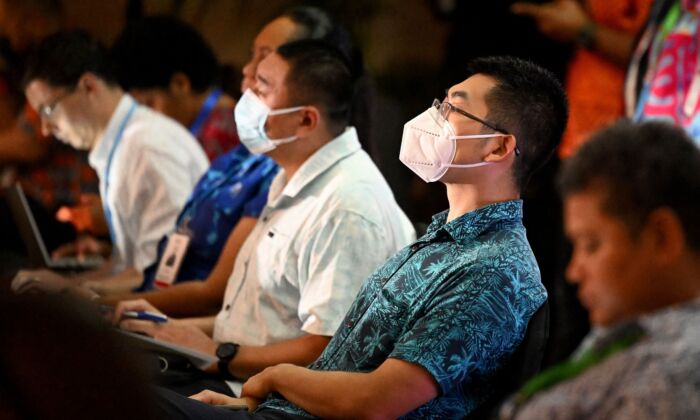 Two officials from the Chinese Embassy (2/R) and (C) listen to US Vice-President Kamala Harris speak via video-link to the Pacific Islands Forum (PIF) in Suva, Fiji, on July 13, 2022. (WILLIAM WEST/AFP via Getty Images)
Australia

The officials were sitting with the media contingent before a reporter from The Guardian newspaper recognized the two males. When questioned on whether they were representing Xinhua News Agency or the Chinese Embassy, one man just shook his head.

The reporter notified Fijian police, who then removed the two men from the event.

Nations outside the Pacific Islands Forum membership usually aren’t invited to attend the event. In fact, Harris’s address to the Forum was a rare exception.

US Ups the Ante in the Pacific

Harris’s announcement of the diplomatic offensive is being viewed as an attempt to wrest back influence over the Pacific. The Chinese Communist Party (CCP) and democratic nations have been locked in an ongoing diplomatic tug of war over the region.

The Biden administration, going forward, will dispatch the Peace Corps to the region, establish embassies in Kiribati and Tonga, appoint the first-ever U.S. Envoy to the Forum, and look at reestablishing a U.S. Agency for International Development Regional Mission for the Pacific to deal with natural disasters and humanitarian aid.

“The history and the future of the Pacific Islands and the United States are inextricably linked. We have historic bonds going back generations,” Harris said during her address.

“We recognize in recent years, the Pacific Islands may not have received the diplomatic attention and support that you deserve. Today, I am here to tell you directly we are going to change that.”

Australian and New Zealand leaders were also in attendance.

‘Listening’ to Pacific Leaders and Their Concerns

Australian Prime Minister Anthony Albanese promised to bring “positive energy” to the event and touted his government’s openness to “listening” to the Pacific’s concerns on climate change.

“I’ve spoken about treating countries with respect. What that means is not just talking but listening,” he told reporters on July 13. “We have, as human beings, two ears and one mouth for a reason—because we should use the ears twice as much as we use our mouth. If you do that, you’ll learn from each other.”

“The Pacific has been clear in saying that geopolitical competition is of lesser concern to them than the threat of rising sea levels, economic insecurity, and transnational crime. Australia respects and understands this position. And we are listening,” Marles told the Center for Strategic and International Studies in Washington.

Cashing in on Climate Change Movement

Yet Eric Louw, a retired professor of political communication and expert in affirmative action, said leaders of developing countries could simply be exploiting Western sentiments around climate change and guilt around colonialism.

“Unfortunately, the Left has so widely propagated this anticolonial mythology that it is becoming almost impossible to have a sensible discussion about the age of imperialism,” he wrote in The Epoch Times.

In a separate piece, Louw referenced the ongoing geopolitical competition between democratic nations and Beijing.

“During the Cold War days, corrupt politicians in weak, underdeveloped countries from the Pacific to Africa, and Latin America to Asia got rich playing the two sides off against each other,” he wrote.

In recent months, this competition has heated up with the signing of a security pact between the Solomon Islands and Beijing that could open the door for the CCP to station troops, weapons, and even naval ships in the region.

Albanese declared on July 14 that he was “very confident” that Solomon Islands Prime Minister Manasseh Sogavare wouldn’t allow that to happen.

“I sat with him at dinner last night. One of the things we need to do is build personal relations between Australia and our friends in the Pacific,” he told Channel Nine. “We need to be prepared to listen to what they have to say, be prepared to assist in their development. But also be prepared to advocate, as my government is, action on issues of concern to them.”