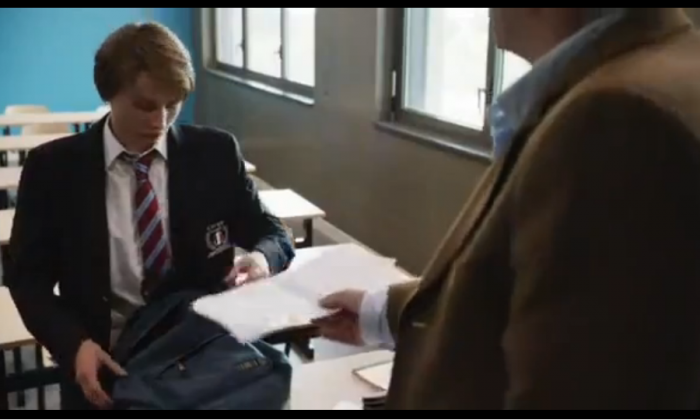 An August 5, 2013 photo of a scene in Dans la Maison, a 2012 French film, where a sixteen-year-old boy, Claude, hands in his first assignment that describes the "middle-class woman" he is watching as he visits his classmate's house. This and other assignments triggers the ultimate events that unfold in the acclaimed movie "unapproved" by the Chinese Communist Party, yet reportedly due for a private screening at Beidaihe this year. (Putlocker)
China

Top Chinese Communist Party officials are gathering for the yearly Beidaihe secret meeting in Hebei Province. On the agenda? A recreational screening of Dans la maison (In The House), a 2012 French film that was banned in China.

As armed police and model workers arrive at the private beach resort, officials are preparing for the meeting that not only decides Party policies but also serves as a vacation that includes film screenings.

Four films have been selected so far, according to Duowei, an overseas Chinese news website. They include the R-rated Dans la maison. The film tells of a sixteen-year-old boy, Claude, (Ernst Umhauer) who inserts himself into the family of his schoolmate and submits vivid papers to his high school English teacher, Germain, (Fabrice Luchini) describing the “middle-class woman” he eyes, as well as other exploits. As the tales grow more outrageous, Germain becomes obsessed with Claude ‘s school assignments.

The film was adapted from the Spanish play, The Boy in the Last Row and has garnered multiple awards, including the Golden Shell.

Directed by Francois Ozon, known for the acclaimed crime musical 8 Femmes (Eight Women), the film also contains many references to Chinese art and one depiction of Mao Zedong as an inflatable nude doll with puckered lips that many believe caused the Party’s disapproval.

In response to the news that officials would be gathering at the Beidaihe beach resort, netizens took to Sina Weibo, China’s Twitter-like platform, to comment.

A netizen from Jiangsu Province said, “Why do these top cadres spend our taxpayer money on a vacation in Beidaihe?!”

“Will Sola Aoi be the guest star performer for these officials?” asked a Hong Kong netizen, referring to a Japanese actress famous in China for her adult films.

Officials at Beidaihe have been entertained by censored movies in the past. In 1987, the former Party general secretary Zhao Ziyang watched the Chinese film Hibiscus Town with his fellow officials. Zhao reasoned that, “We’re here to watch a movie, not to critique them.”