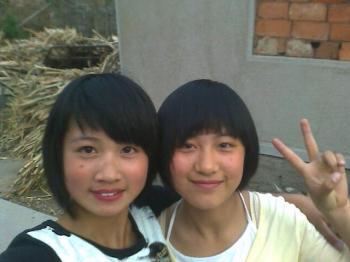 Two 14-year-old girls, Zhao Shanshan and Sun Qingqing, (right) went missing on their way to school on May 12, and were found the next day in a rental apartment occupied by young men. (Photo provided by a family member)
By Chen Yilian

Chen Yilian
View profile
biggersmaller
Print
A gang of men in a small town in Shandong Province are alleged to have killed two 14-year-old girls from a nearby school, according to personal statements posted online and interviews with family members. Police are accused of then covering up for the men, saying the girls had committed suicide.

The men responsible are said to be part of a gang that operates in the town, the leader of which is the nephew of the head of the Public Security Bureau.

Zhao Shanshan and Sun Qingqing were two middle school pupils in Jimo City, Shandong Province. They went missing on their way to school on May 12, and were found the next day in a rental apartment occupied by young men.

Zhao Shanshan’s parents broke into the apartment after struggling with three of the young men who tried to stop them from entering. They found Zhao and her friend Sun Qingqing had just been forced to drink pesticide.

The two 14-year-old girls died after a day of unsuccessful emergency medical care.

The local police concluded the girls had committed suicide. When the parents appealed to officials on Sept. 9, they were told that it was not a criminal case.

Zhao’s father, Zhao Pixue, told The Epoch Times: “There are a dozen men in this town who are known to rob and rape. Leader Qu Tao celebrated his birthday and detained the two girls in his apartment. When we went looking for our daughter, three of them armed with screwdrivers tried to stop us from entering. I saw from outside through the apartment windows that the girls were fine. When we eventually got into the apartment they had already drunk the pesticide. Those men killed them to shut them up.”

Mr. Zhao said he noticed a pungent chemical smell once they got into the apartment, by which time the girls were no longer able to speak, and it was too late. At the hospital they were told the chemical had no antidote, being the pesticide endosulfan, which has been banned in the U.S. since 2000.

The Epoch Times also spoke to Sun’s older sister: “Local officials have not given us a reasonable answer. We went to the school trying to understand what happened. The people from school would not let us in and beat us. The coroner's examination revealed the girls’ hymens had been ruptured.”

According to Zhao’s father, the police arrested five of the men but they were released on bail.

On May 16, Jimo City police published a report in the local Baodao Metropolitan News and on the city’s official website, claiming the two girls committed suicide; no third party was present when it happened, they said.

Mr. Zhao thought the official treatment deplorable, and posted his narrative of the tragedy online.