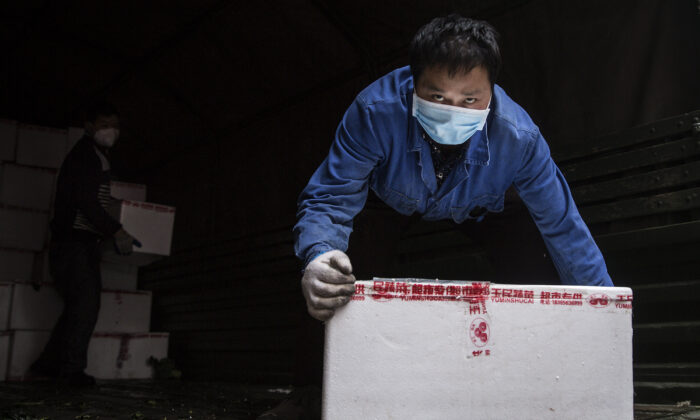 A employee wears a protective mask whilst carrying vegetables from trucks at a hospital in Wuhan, China, on Feb. 10, 2020. (Getty Images)
INSIDE CHINA

Officials from two coronavirus-stricken cities in southern China have been authorized to confiscate private property in an effort to combat the outbreak that has pushed the country’s health system to its limits.

According to a notice posted on Feb. 11, city and district-level authorities in Guangzhou city can, “when necessary,” “temporarily expropriate” houses, venues, vehicles, and other resources from companies or individuals.

The government can also ask relevant organizations to produce or provide disease control equipment or daily supplies, according to the notice. It noted that officials carrying out such measures should compensate parties accordingly and return the materials if possible.

Meanwhile, the city of Shenzhen issued a similar notice the same day that authorizes local officials to expropriate supplies, equipment, and venues from the public to meet the needs of frontline health workers, provided they return the items or offer compensation.

The Shenzhen notice also allows the government to shut factories, companies, schools, and limit public gatherings as well as the use of sites that are “susceptible to the outbreak’s harm.”

Heng He, a U.S.-based political affairs commentator, voiced skepticism about such measures. While similar emergency policies have been utilized in other countries, Heng doubts the regime’s capacity to honor its pledge to provide compensation.

“Doesn’t matter whether this is consistent with the constitutional law—the Chinese Communist Party doesn’t even obey their own laws,” he said.

Heng said the policy appeared to be a new way for Guangdong authorities to “rob riches from the public.”

“Even though they said there will be compensation, a lot of people have experienced such compensation during forced demolition—a lot [of the compensations] are symbolic,” he said.

Forced demolition campaigns have been a recurring issue in China over the past two decades. According to a 2019 report by Beijing Shengting Law Firm, at least 751 complaints were filed from 2014 to 2017 over forced demolitions, and in 43 percent of the cases, officials didn’t follow any legal procedures.

Heng said that the notice of authorization may enable officials to “profit off the nation’s misfortune.”

Residents in other cities have reported local officials abusing the lockdown rules.

A few citizens in the province of Hebei, who spoke on condition of anonymity, told The Epoch Times that local officers have blocked transportation in their neighborhoods, and only allow people to go through if they offer some form of bribery, such as expensive wine.

Some netizens echoed the same sentiments on Chinese social media.

“Personal properties … So where should these people go?” One asked. Others also relayed fears that given the authorities’ censorship of the on-the-ground situation, the policy could be a barometer of the outbreak’s severity.

To date, more than 80 cities, including Beijing, Shanghai, and Shenzhen, have entered into at least a partial lockdown to prevent further spread of the deadly virus. In addition, citizens across China are told to wear masks when in a public setting, while schools in over a dozen provinces have postponed the new term for the second time in about two weeks.

About two dozen major international airlines, including United Airlines, Delta Air Lines, and American Airlines, have suspended flights to China. American, on Feb. 11, extended its suspension to late April, saying it will “make any adjustment if necessary.”

“With 99 percent of cases in China, this remains very much an emergency for that country, but one that holds a very grave threat for the rest of the world,” Tedros Ghebreyesus, director-general of the World Health Organization, said in a press conference on Feb. 11.