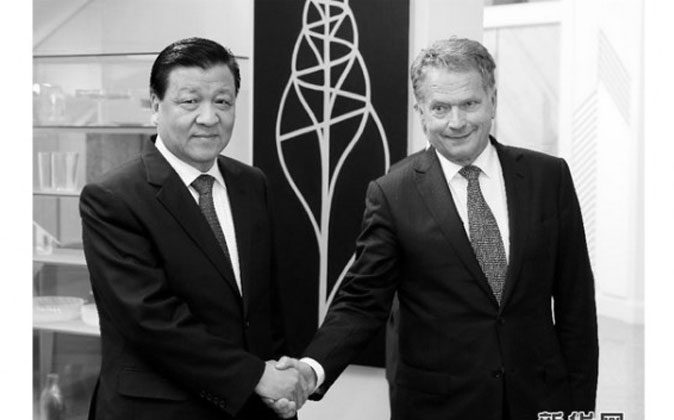 Liu Yunshan (L), the head of propaganda and ideology in China, shakes hands awkwardly with Finnish president Sauli Niinistö on June 15, the last day of Liu's visit to the country. (Screenshot/Xinhuanet.com)
China

The four-state visit to Europe of Liu Yunshan, one of the highest ranking officials in China, is being dogged by his past activities in China, which have been compared to the hate-laced propaganda that fueled a genocide in the African nation of Rwanda in 1994.

Liu’s trip includes a stop in Denmark, then Finland from June 12 to 15, and finally Ireland and Portugal.

Liu Yunshan is a member of the seven-member Politburo Standing Committee, the nerve center of the Communist Party. He simultaneously holds a variety of posts in Party organization, propaganda, and ideological work.

But it his previous efforts in the realm of propaganda and political mobilization that are being brought to the attention of government agencies in each of those nations.

“We write to call to your attention Mr. Liu’s direct involvement in a grave situation of mass human rights abuse,” says a letter prepared by the Washington, D.C.-based Human Rights Law Foundation, which conducts litigation against Chinese officials.

“Mr. Liu has served since 1999 as one of the leading administrators of the violent, internationally condemned crackdown on Falun Gong,” the letter says.

Falun Gong is a traditional Chinese spiritual practice that achieved mainstream popularity in China during the 1990s, gaining at least 70 million practitioners by 1998, according to official figures. In July of 1999 the leader of the communist regime at the time, Jiang Zemin, initiated a nationwide persecution of the practice.

One of the top generals in this effort was Liu Yunshan, who was a member of the Party’s ad hoc “Leading Small Group” established to mobilize the bureaucracy and the nation against Falun Gong.

Specifically, Liu Yunshan took charge of the “Propaganda Work Office,” and exercised significant control over the security apparatus that carried out the violence.

“Falun Gong adherents in Mainland China have, since 1999, endured the most severe forms of persecution and abuse violative of their fundamental human rights,” says the Law Foundation’s letter. “Such abuse has occurred with the authorization, support, specific direction, and substantial assistance of Liu Yunshan, acting in concert with other high-level individuals in the Communist Party.”

The group outlines specific examples, gained from the public record, of Liu’s role in the Falun Gong persecution. This includes the hosting of political rallies where cadres are mobilized to “struggle,” or “douzheng” in Chinese, against Falun Gong.

The term refers specifically to the extralegal, political persecution of a target group, and is widely used by perpetrators of the anti-Falun Gong campaign to incite violence against victims, according to a deposition prepared for the Human Rights Law Foundation by He Qinglian, a well-known Chinese economist and political analyst.

In February of 2000, Liu specifically praised a number of the labor camp security teams that planned and carried out physical torture against Falun Gong practitioners. Accounts by survivors of this treatment describe such acts as using electric batons to attack the genitals, in an effort to force the victim to renounce their spiritual beliefs and swear allegiance to the Communist Party.

The Law Foundation goes over a number of theories of legal liability that may apply to Liu, though they are not (at least not yet) calling on European governments to initiate prosecution of him.

“We’re letting them know that we’re investigating these crimes, and we have quite a lot of evidence,” said Terri Marsh, the executive director of the Human Rights Law Foundation. “We are asking that European leaders take notice of who they’re meeting with and raise the issue during the meeting.”

“Liu Yunshan’s extensive propaganda and organizational activities against Falun Gong in China, no less than Mr. Bazaramba’s against the Tutsi of Rwanda, contributed significantly to the commission of severe and widespread crimes against humanity,” the letter said, referring to Francois Bazaramba, a Rwandan pastor who helped to organize a genocide in that country, which led to the deaths of up to one million people. As in the Falun Gong persecution, propaganda that sought to strip the target group of its humanity was a crucial step to inciting violence. The Finnish Supreme Court sentenced Bazaramba to life in prison in late 2012 for his role in the genocide.

“It behooves Finland and all other members of the world community not to ignore these well-documented violations,” the letter said. “These ongoing human rights abuses should be raised specifically, publicly, and often.”