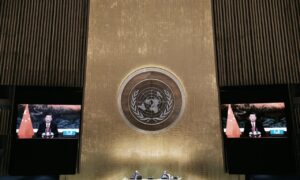 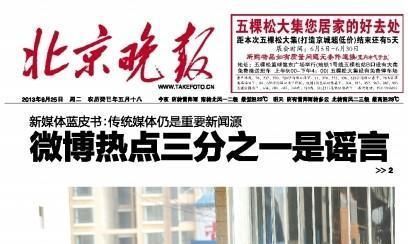 The front page of Beijing Evening News on Tuesday, June 25. The paper reported on the study released by the Chinese Academy of Social Sciences, which stated that Weibo netizens were poorly educated and had low incomes.
China

Chinese users of microblogs like Sina Weibo, an analogue to Twitter, are poorly educated and have low incomes, a study by the Chinese Academy of Social Sciences, a communist think tank, found Tuesday. The study’s findings were earnestly reported in a front-page story on the state-run Beijing Evening News, but as often happens were circulated and mocked by netizens.

Users of China’s most popular microblogging platform, Sina Weibo, were portrayed by the study as blue-collar gossipers whose posts were one-third rumors.

In response, a Hubei netizen called Luo Yi wrote: “How can someone who tells complete lies all the time not be ashamed to make fun of a population where two-thirds tell the truth?”

The think tank stated in its study that 92.2 percent of the bloggers earned less than 5,000 yuan ($814) a month. Students make up the majority of Weibo’s netizen population, so they may have brought down the average income number.

According to Beijing Evening News, by the end of 2012, the number of Weibo accounts affiliated with Party media outlets was reported to be over 110,000, though the article did not explain how there could be such a large number of official media Weibo accounts. In any case, according to the Beijing Evening News, “The rise of Weibo accounts affiliated with Party Central media outlets has changed the slow pace in how mainstream media responds to hot Internet events, and has enhanced the ability of mainstream media to conduct public opinion guidance.” In the article the term “mainstream media” was used to refer to Party-run media outlets, though the majority of Internet users do not generally see them that way.

On the same day that the front-page story was published, Weibo began responding extremely slowly to server requests. At 10 p.m. Beijing time on June 25, a time when Weibo is usually bustling, the site was crawling along, taking more than five seconds to load a page, and often displaying a screen with a plain text message, “The server returned an invalid or incomplete response. Please try again later.” It was unclear whether the article and the server slowdown were connected.