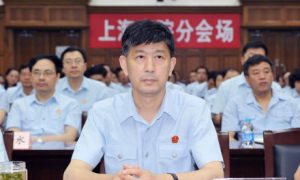 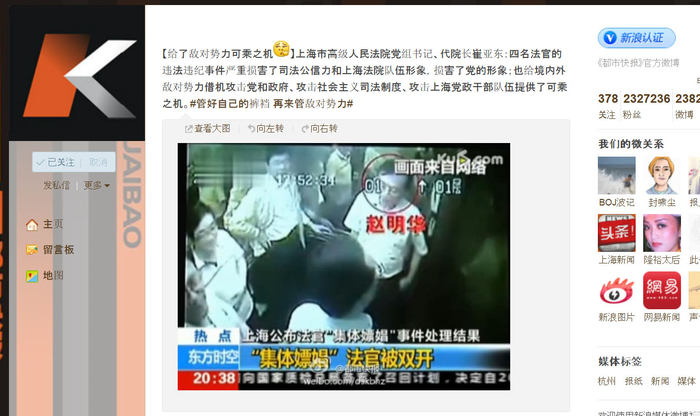 Judges are pictured in an elevator at a Shanghai resort. They were videotaped accompanied by prostitutes, who visited their hotel rooms for between 30 to 90 minutes. The reference to "hostile foreign forces" in the wake of the scandal drew derision online. (Weibo.com)
China

A top Communist Party and judiciary official in Shanghai faulted foreigners for making light of the Chinese regime after four judges in China were caught with prostitutes, and video evidence of the scandal was put on the Internet, spreading throughout China and around the world.

“This incident gave an opportunity for domestic and foreign hostile forces to attack the Party, government, socialist judicial system, and Shanghai Party and government cadres,” said Cui Yadong, Secretary of the Party Group of the Higher People’s Court of Shanghai, in paraphrased remarks, according to Chinese official media.

Cui was giving an unusually frank assessment of the damage caused by a recent scandal involving four judges and their liaison with prostitutes.

The incident “had a great impact and brought great harm to the undertaking of the Party and the nation in constructing legal institutions,” Cui added.

He spoke at a “rectification conference” on Aug. 9, according to an account in People’s Court Daily.

The behavior of the judges, and the wide spread of the news in China, made a mockery of Party leader Xi Jinping’s anticorruption and “mass line” campaigns, which were supposed to project an image of a clean and austere Communist Party that is working in the interests of the people. As such, Cui said, there would be a campaign of rectification, “severe education,” and “strict supervision” in the judiciary. This form of Party jargon is usually used to refer to ideological indoctrination in the latest policies of the Party.

The four judges who were videotaped with prostitutes in June, and a tape of which was released on Aug. 1, were later sacked, and three of them were expelled from the Party.

The reference to “foreign hostile forces,” who regularly pop up when things go wrong in China, was met with derision online.

Mr. Huang from Huangzhou wrote on Sina Weibo, a Twitter-like social media platform: “Us little people are shocked: Such a thing can be related to hostile forces!”

A Beijing netizen posted on Weibo: “Are the people who report news hostile forces? Are those of us critiquing on your mistakes and corruption also hostile forces?”

A Guangzhou resident, in a telephone interview with Epoch Times, remarked: “Your internal system is so corrupt that there’s no need for hostile forces to attack you,” referring to the authorities in the second person.

Problematic conduct has been alleged of Cui Yadong himself, surrounding the 2010 conviction of Li Qihong, a man found guilty of involvement in organized crime. The public widely took the view that Li was an entrepreneur who had been wrongly accused, so his assets could be confiscated by public security officials. At the time Cui was the Public Security Bureau chief of Guizhou.

A lawyer in Guangzhou, using the handle “Xiaosi In Guangzhou” wrote: “He was the PSB chief and [Cui Yadong] personally led the investigation of the ‘Li Qinghong case’. After such a corrupt case, how could he be promoted to be the Court President? Were there no eligible options? Or is Cui Yadong just incredibly talented?”