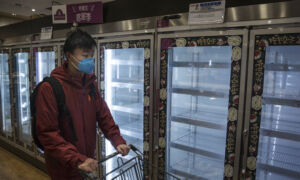 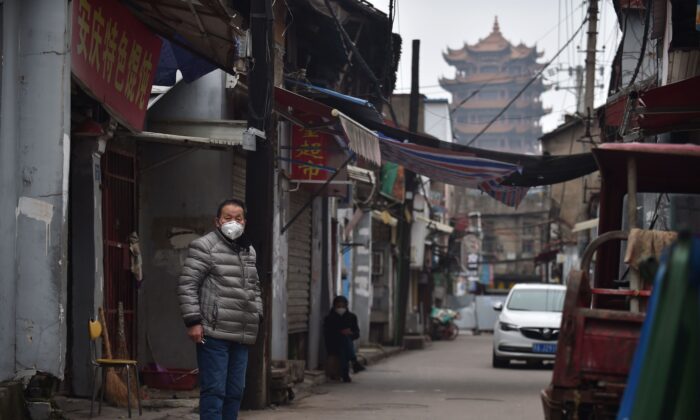 A man wears a face mask as a preventive measure against the COVID-19 coronavirus in an alley in Wuhan, in China's central Hubei Province, on Feb. 26, 2020. (STR/AFP via Getty Images)
China Society

A Chinese communist official in Wuhan, the epicenter of the COVID-19 outbreak, recently exposed the situation in the neighborhood under his jurisdiction, detailing how authorities were ineffective in handling the crisis. He posted a letter on the internet but it was removed by censors soon after it went viral on Feb. 18.

Vancouver-based Chinese media Creaders.net saved the anonymous letter and republished it on its website.

The Chinese regime has ramped up censorship measures; internet police are working around the clock to monitor online chats and social media posts regarding the coronavirus outbreak. Any posts that criticize the Communist Party’s response to the epidemic are immediately deleted. Some authors have been punished by local police.

Editor’s note: The following is an English translation of the official’s online post, originally written in Chinese, and has been edited for clarity. The Epoch Times could not independently verify the details in this account.

I am almost 60 years old. Since I am afflicted with coronary heart disease and high blood pressure, I should be turning a blind eye to many things so I can keep my temper under control. However, I am at the forefront of the battle against the epidemic and I live in a “super infected block.” I have witnessed a very chaotic situation where human lives are at stake, and I must get it off my chest regardless of the consequences.

Our residential community announced the implementation of lockdown management on Feb. 10. The first problem, however, is that the rules for the isolation facilities have been loosely applied, which I can still observe today [Feb. 18] from my apartment, a high-level unit. The second problem is that security measures have turned out to be a mere formality. I saw with my own eyes that security guards were often absent from their posts. Many of them let people through after asking a few simple questions instead of checking their passes or credentials, or taking body temperatures. The third problem is the failure to control residents. Unauthorized residents have managed to get in and out regardless of the guards’ warnings. Some even walked past the guards by merely showing their high official work IDs.

Isolating oneself at home is a joke. When the leading coronavirus control authorities at all levels shifted the blame, local residential communities were commanded to enforce the quarantine orders—a task far beyond their capacity. In our community, for instance, a mere 10 staff members are put in charge of around 3,613 families. At the initial stage of the city lockdown, like many other communities, ours also had patients who struggled to get diagnosed or hospitalized. The three taxis owned by our community were not enough, even if they operated 24/7. And drivers who had no protective suits were not willing to assist patients or suspected patients. Sometimes, when 120 [China’s medical emergency number] was called, the drivers would not come unless the patient had already been accepted by a hospital. [Editor’s note: A patient must first receive approval to be admitted at a hospital.] As a result, patients and their families went to the community service center and hospitals on their own, leading to the exponential growth of infected cases within the community.

Before the policy of “isolating whoever should be isolated” was enforced, it was actually the healthy people who stayed at home, while the four groups of people—identified as confirmed cases, suspected cases, those with a fever, and those who had close contact with confirmed or suspected cases—went out every day. Such a ridiculous fake “quarantine” has caused the occurrence of more than 580 confirmed patients in our Shuiguo District before Feb. 13. Even in such a tiny area, the number of the above mentioned four groups of people could have exceeded 1,000. Our block, for example, has become a real “super infected block” containing nine people who belong to one of the four groups.

Helpless patients who died because of delayed treatment were reported to the residential committee. But without protective suits, the staff there refused to collect the bodies. It was even more ridiculous that some people got rid of the clothes that their deceased family member(s) wore (when they were ill) and placed them in the common area. These clothes were left to be disposed of by inexperienced volunteers and residents with their bare hands, because no professional would come to disinfect them.

On Feb. 8, China’s Central Steering Committee issued an order declaring war against the epidemic. For a few days, more than 30,000 government employees supposedly went into the community to carry out comprehensive and detailed investigations. I know how these investigations were conducted. Imagine, one of these officials claimed to have investigated 99 percent of the residents! Of these 30,000 plus people dispatched, there would only be about ten of them working to investigate any one community. How could ten plus people figure out the number of residents in a community within three days? It would take more than three years to complete the overall investigation. This, in fact, was another unenforceable order.

Being Denied the Right to Know the Truth

Lies are killing people in Wuhan. We don’t know the real situation, not even the situation of our own residential building. But we deserve the right to know everything, which can only help us to control the contagion. We were told that buildings with red tape indicate that no residents are infected by the virus, but the ones with white notices posted outside indicate infections. But our building has no such notices, and we have no way of knowing who’s infected. So some residents believe it’s safe to go in and out of the building.

People working in the ​​Shuiguo District, including many from the Provincial Party Committee and the Provincial Government, are not aware of how serious the epidemic is here. They don’t know that six hotels nearby have been requisitioned for quarantine. They don’t know that we have more than 580 confirmed patients. Nor do they know that there are hundreds or even thousands of the four groups of people in our area! No wonder they [local officials] dared to come in and out and walk their dogs around so carefree every day before the serious news [coronavirus outbreak] was announced in mid-February!

I didn’t know until Feb. 12 that there are 90 who are designated as one of the four groups of people in our community, and nine of them are in my building. Realizing that the situation is getting worse, I chose to join the volunteer teams without hesitation, hoping to relieve the pressure on the community somehow. Today, I have disclosed the epidemic situation in my community to notify the public. I hope this does not violate any of the rules.