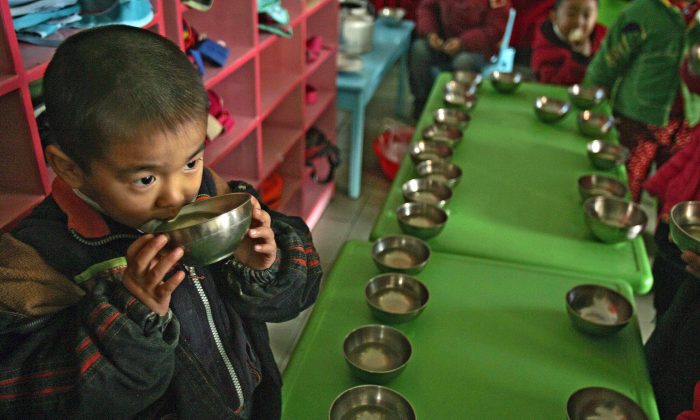 Photo taken on Nov. 27, 2007, showing a child in Henan Province, where life in his village has returned to 1960s China, having rejected market reforms and returned to a collective economy with villagers working for the good of the community. A communist official in western China has apparently laid claim to fathering half the children in his village with "left behind" wives whose husbands have to go to cities to get work. (Peter Parks/AFP/Getty Images)
China

Chinese Official Claims Fatherhood of Half the Kids in His Village

A Communist Party secretary has apparently fathered half the children in a village in the western province of Henan.

Using the alias Da Wan, the official reportedly told state mouthpiece People’s Daily, “This village, half the kids are mine,” referring to a small town about 50 miles southwest of Sanmenxia City.

The truth of the claim cannot be independently verified, although various posts mentioning the story, such as Sina News, have been censored.

In rural China, it is common for one or both parents to migrate to cities in search of work, creating the widespread phenomenon of “left behind families.” This change to the family unit causes social problems, with children often not receiving proper care or education.

According to the People’s Daily commentary, the official Da Wan would wait for a woman’s husband to go away, and then pursue her as his latest conquest. However, the reporter said that the local villagers are more upset about the unlawful occupation of their properties than sexual assault or illicit affairs, suggesting that the official’s real motivation was to acquire land.

Based on a study mentioned in the article, more than half of China’s “left behind wives” never visit their husbands working in cities, and 20 percent are unfaithful. The piece states that there are currently 47 million Chinese women who are left behind in villages.

Netizens reacted strongly to the news with numerous comments made on Sina Weibo. A Henan Internet user blogged: “Miserable, hateful, terrible.” Another in Gansu said: “What can we do to prevent this loss of morality?

“Isn’t this like Cold Mountain?” remarked a Sichuan blogger, referring to the movie about the American Civil War during which some Home Guard officers terrorized southern families, instead of protecting them while the local men were away fighting against the north.