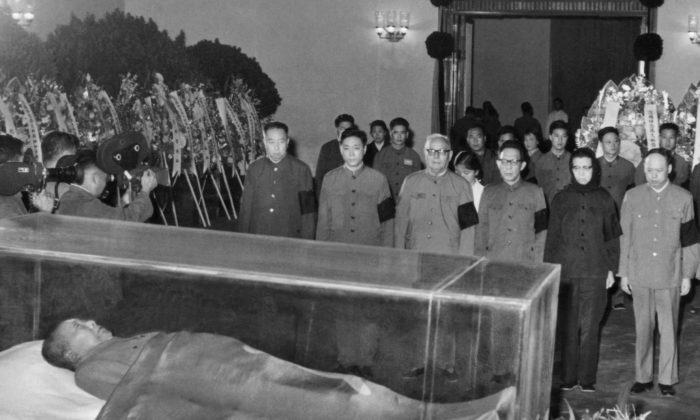 At a meeting of China’s State Council on July 6, a Communist Party historian announced that his organization will begin research into the deep and often-neglected annals of the regime.

But rather than a faithful documentation of the Party’s 95 years of existence, Zhang Shujun, deputy director of the Party History Research Center, intends the research to “conquer public opinion with persuasive and inspiring stories of the Party’s historical achievements,” as the state-run propaganda outlet Global Times puts it.

It is thought that in this way, the Party can shape public and intellectual views of its history—which includes the Cultural Revolution and Great Leap Forward campaigns that killed tens of millions of people.

In the years since China’s economic reforms, the Party has retained control over the media and state power, but has been hard-pressed to keep Marxism relevant in the daily lives of ordinary Chinese.

Meanwhile, the rise of social media and exchanges with the outside world have fueled interest in modern Chinese history, and with it awareness of the abject brutality that has accompanied communist rule.

A well-known example of this can be seen in the popular Beijing high school teacher Yuan Tengfei, whose lively and animated lectures condemned founding Chinese communist leader Mao Zedong—who directed the Great Leap Forward and Cultural Revolution—as a monster equal to Hitler.

The Communist Party, which sums up Mao’s rule as “three parts mistaken, seven parts successful,” may be preparing to take more direct measures to curb what Zhang Shujun described at the State Council meeting as “historical nihilism” and defamation of communist leaders and heroes.

Denouncing “wrong information” on the internet, Zhang called for the study and popularization of “important personnel” as well as promotion of “academic research of sensitive topics from all sides.”

Ma Yong, a researcher at the Chinese Academy of Social Sciences, indicated in an interview with Global Times that Zhang’s organization can help the Party get a handle on historical subjects by offering more detailed, yet still politically correct narratives of its past.

“There should be more discussion of the Cultural Revolution this year because it’s the 50th anniversary, but people are afraid to talk about it,” Ma said.

Of course, this new revisionism does not even acknowledge its own blindspots. The researchers never made reference to the actual human death toll in the Party’s political campaigns. And political violence that occurred in the last few decades — the Tiananmen Square massacre, for instance, or the persecution of the Falun Gong spiritual practice, which is ongoing — was not even mentioned.