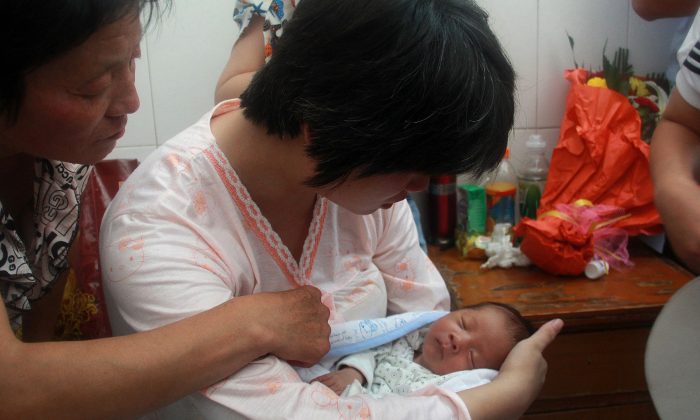 A woman reunites with her newborn baby who was sold by the doctor who delivered him at a hospital in Fuping County, central China's Shanxi province on Aug. 5, 2013. Other cases have been reported across China in recent years. (STR/AFP/Getty Images)
China

A nurse in southern China’s Guangdong Province was arrested recently for human trafficking, after she was caught selling off the newborn babies she was entrusted to protect, according to Chinese press reports.

Along with the nurse, nine other trafficking suspects were also arrested, while five babies were retrieved and returned to their parents.

The nurse, identified in reports only as Ms. Wu, began the criminal enterprise last year, after she overheard patients in the hospital discussing abandoning their newborn babies. She worked in Maoming City of southern China’s Guangdong Province, the state-run New Express Daily reports.

Ms. Wu confessed to police that she paid a few hundred yuan (100 yuan is $16) to the parents who intended to abandon their babies, and convinced them to give the infants to her.

Once she had the goods, Ms. Wu flipped them to traffickers, who then sold them to couples looking to adopt.

Maoming police arrested two baby traffickers as they were trying to sell a three-month-old in a rural village near Maoming this April. Following leads, police eventually discovered that the nurse, Ms. Wu, was their baby source. Five babies trafficked through Ms. Wu have now been traced and returned to their parents.

The details of this unusual case captivated many Chinese who read the news, many of them focusing their anger on the irresponsible parents, who should be punished, they said, for abandoning and selling their children.

Similar cases of nurses selling infants have been reported previously.

One case was reported in northern China’s Inner Mongolia Autonomous Region this January, after an 18 year-old unmarried mother, surnamed Zhang, went to a hospital in Chifeng City to have her baby boy aborted.

Ms. Zhang eventually learnt that her son was alive, after receiving a telephone call from police who had found a trafficked boy that they suspected of being hers.

In August last year Zhang Shuxia, an obstetrician, was arrested for selling newborn babies she delivered at a hospital in Fuping County of Shaanxi Province. Zhang took away the babies, then lied to the parents, saying that the infants were severely ill and had died. More than 10 families had their babies stolen and sold by Zhang, including a pair of twins, the state-run Beijing News reported.