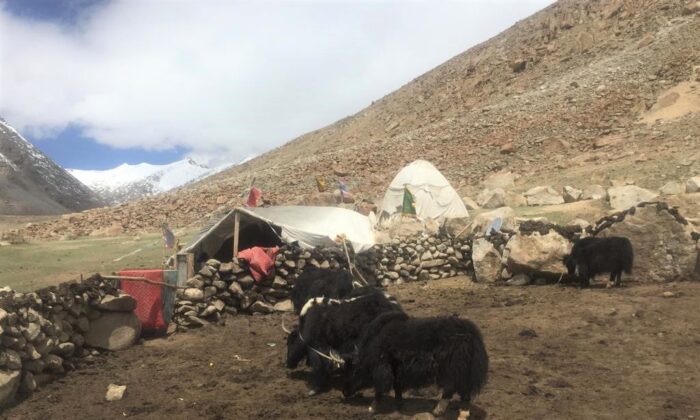 A Yak pen along with the tents of a Changpa nomadic family in Changthang, enroute to Pangong Tso Lake in Ladakh, India, on June 22, 2021. (Venus Upadhayaya/Epoch Times)
India

NEW DELHI— Due to restrictions imposed by the Indian military after a bloody conflict between India and China in 2020, nomads in India’s Ladakh region, which borders China, haven’t been allowed to return to their traditional pastures. Yet their Chinese counterparts have been sighted moving into the area.

Kunchok Stanzin, a Ladakhi public servant, shared with The Epoch Times a 45-day-old picture of what he claimed are yaks belonging to Chinese nomads grazing in India’s Tharsang Valley, near the Martsemik Mountain Pass. Indian nomads from the region haven’t yet been able to return to the pastures because of restrictions imposed by the Indian military after the 2020 conflict between India and China in the Galwan Valley, as well as the subsequent standoff and further military build-up that followed.

Stanzin, who oversees 12 villages—including eight that are located on the disputed border in India’s Chushul region—said the nomads rely on the pastures not only for grass to feed their livestock, but also as grounds for their highly prized pashmina goats to give birth.

Stanzin said he has asked the area’s top official, Ladakh Lt. Gov. R.K. Mathur, to facilitate a meeting between the army and the community to bridge communication gaps before the arrival of the winter grazing season.

“China encourages its nomads to graze on the border pastures. We should also allow our nomads to use traditional grazing grounds. They can play an important role by keeping an eye on the intruding Chinese,” Stanzin told The Epoch Times.

The situation is having a severe impact on the economy of the border region, where 85 percent of the population are nomadic and depend upon livestock for their livelihood, according to Stanzin.

The nomads of Changthang, a large region that includes eastern Ladakh on the border with China, are called Changpas. Their nomadic migratory routes in the region are well defined, and the grazing areas of their livestock are demarcated. These groups have attained legal rights over these “areas by way of usage,” according to a 2011 grazing land study by the Indian government (pdf).

When the study took place, the nomads were already facing a shortage of pastures due to overgrazing.

Over the past decade, as Chinese intrusions into the region have increased, the military build-up on both sides has further restricted the Changpas’ access to their traditional pastures.

Ladakh is a trans-Himalayan region and is bordered by what China designates as the Tibet Autonomous Region. Before the Chinese Communist Party (CCP) took over Tibet, the region was a trade convergence point for various silk routes from Kashgar, Khotan (now known as Xinjiang), Tibet, Kashmir, and Himachal Pradesh (now park of India).

Its high-altitude routes and passes were regularly traversed only by either the silk route traders or the Changpas. The past few decades of militarization along the border have turned these traditional pastures, including those owned by various Buddhist monasteries, into strategic assets for both nations.

Particularly after the 2020 Galwan conflict, the locals fear that the Chinese are using their nomads and grazing yaks as a salami-slicing tactic, according to Stanzin, who serves as the councilor of the Chushul constituency under the Ladakh Autonomous Hill Development Council.

“No wild yaks exist in [Tharsang Valley],” Stanzin said. “Our locals have seen their yaks. Earlier, our nomads were allowed on traditional pastures on the border, but since conflict escalated, several restrictions have been imposed. Last winter, our nomads were not allowed.”

To highlight how precarious the situation has turned, Stanzin said there are winter pastures at Pangong Tso lake, an 83-mile-long brackish lake, only one-third of which is within Indian territory.

The finger-like land elements, which are numbered one to eight, are on the bank of the Pangong Tso, and they’re also patrolling areas. India’s perception of the Line of Actual Control (LAC), the de facto border between the two countries after the 1962 war, runs through Finger Eight.

However, the Chinese have a different perception of the border, saying the LAC passes through finger 2. Just before the Galwan Conflict, a military confrontation between the two countries had happened twice—at Finger Five and Finger Two and during the Doklam Conflict, thousands of miles away on Bhutan’s border in 2017, the Chinese had advanced to Finger Four before going back.

These theatrics between the two countries persist at the disputed borders of Pangong Tso, while the Indian nomads suffer.

The Chushul area in Changthang was the battleground between India and China during the 1962 war. With the 2020 conflict, its strategic significance has only increased.

According to Stanzin, each village in the Chushul region has multiple winter pastures. The village of Chushul, which shares its name with the region, has seven winter pastures: Phurtsur Karpo, Phurtsur Nakpo, Rezangla, Rinchen La, Gurung Hill, Nyanlung Gongma, and Nyanlung Yokma.

In the absence of natural pastures, the nomads have to rely on the stocked fodder provided by the Indian Sheep Husbandry Department. No access to winter pastures increases mortality among pregnant pashmina goats, which give birth around that time, he said.

Mathur’s office didn’t respond by press time to a request for comment on what’s being done to help the nomads on Ladakh’s high altitude border regions.

In 2020, Stanzin wrote to the Indian army’s core commander in the region about the various concerns of the people on the border, including the issue of grazing livestock in the reserved winter pastures.

“Non-delineation of LAC on the ground leads to incorrect interpretation of alignment by civilians, which may result in our own graziers inadvertently crossing over to [the] Chinese side,” Maj. Gen K Narayanan wrote in a reply to Stanzin, in a letter dated April 2 that was made available to The Epoch Times.

“Moreover, due to the present operational situation in Eastern Ladakh, the graziers have been advised to restrict their cattle movements.”

Officials with the Ministry of Defense’s Public Relations Unit in New Delhi didn’t respond to a request for comment by press time.